South Korea staged the 21st edition of the U-20 World Cup from May 20 to June 11 in six cities. England won the 24-team tournament last Sunday by beating Venezuela 1-0 in the final. Hosts South Korea were eliminated in the round of 16. 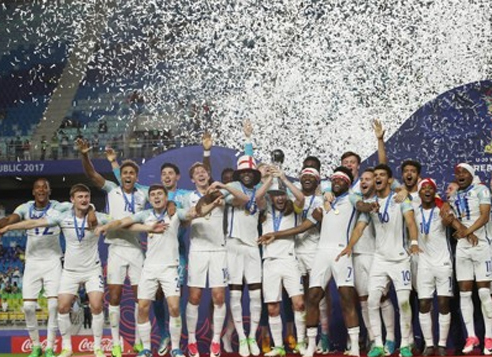 England's under-20 national football team players celebrate at Suwon World Cup Stadium in Suwon, Gyeonggi Province, on June 11, 2017, after winning the FIFA U-20 World Cup in South Korea. (Yonhap)
Chung, head of the local organizing committee for the U-20 World Cup, said that ticket sales for the first U-20 World Cup in South Korea surpassed the organizers' expectations despite political and economic situations in the country. The Korea Football Association (KFA) president also thanked the people for their support for the youth football competition.

"It's a pity that our South Korean team's journey didn't last long... but thanks to host cities and the government's cooperation, I'm happy that we staged the tournament successfully," Chung said in a release. "Although the country's political and economic situation were in tough conditions, our ticket sales and sponsorship deal posted better-than-expected results because of many people's support."

The organizers said 410,795 fans visited stadiums to see 52 matches, for an average of 7,899 spectators per match. This surpasses the average attendance of the previous two U-20 World Cups -- 7,544 for the 2015 tournament in New Zealand and 5,821 for the 2013 event in Turkey -- and the organizers thanked South Koreans' active participation.

The organizers sold 440,000 tickets and generated 5 billion won ($4.4 million). The South Korean team was the biggest ticket seller as three of their four matches were sold out.

"We had ticket sales revenue that met our motto of 'a tournament without free tickets,'" the organizers said in a release. "But still it's disappointing that fans didn't want to enjoy other national team matches, as we saw some 20,000 tickets getting refunded after South Korea were eliminated in the round of 16."

The organizers were also pleased to secure six local sponsors for the tournament amid unstable domestic situations with the presidential election.

The local organizing committee added 36,931 people were involved in the U-20 operation, 1,041 of whom were volunteers. (Yonhap)