[ The Korea Herald – Send E-mail ]
Korea to take appropriate market stabilizing measures
By a2016032
Published : Jun 15, 2017 - 09:28
Updated : Jun 15, 2017 - 15:52
South Korea said Thursday that it will tighten monitoring of the local financial market and take immediate measures to stave off any fallout from the latest US rate increase.

"We will get fully prepared to minimize the adverse impact of the US rate hike," Vice Finance Minister Ko Hyoung-kwon said at a financial policy meeting in Seoul. "The government will keep close tabs on the market and take stabilizing measures in a timely manner." 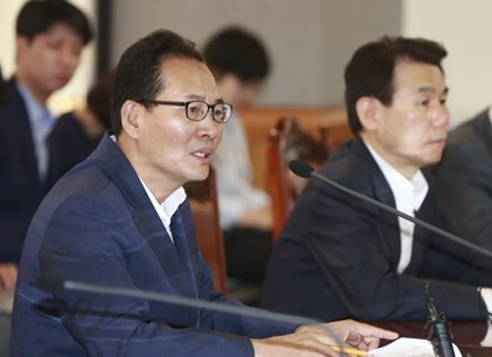 (Yonhap)
The US Federal Reserve raised key interest rates by 0.25 percentage point Wednesday (local time), making its target range for the federal funds rate from 1 to 1.25 percent, a level that's on par with South Korea's.

It was the second time the Fed has raised rates this year after the first hike in March.

The Fed also added it plans to reduce its securities holdings, a move that could spur rates to rise further.

"The Fed's decision did not cause a sudden fluctuation as the market has long anticipated it," the official said. "The South Korean market will likely experience limited volatility as it has favorable fiscal stability."

The South Korean benchmark Kospi finished at 2,361.65 points, down 0.46 percent from a day earlier, while the local currency edged down 0.2 won against the US dollar to change hands at 1,124.1 won.

Finance Minister Kim Dong-yeon also said the US monetary tightening may have little impact on the country's mounting household debt, which reached 1,360 trillion won ($1.2 trillion) as of March.

Local experts have been concerned that higher borrowing costs could result in massive non-performing loans and bring about another financial crisis.

"The US rate hike has been widely expected. Its impact will be limited," said Kim during a visit to an information technology firm in Seoul. "The government is take steps to put the household debt issue under control."

The top economic policymaker earlier pledged to take strong measures against the real estate market which has shown signs of overheating. He may tighten a set of borrowing rules that allow home buyers to borrow up to 70 percent of their property value or 60 percent of their income for mortgage payments. (Yonhap)