LONDON (AP) -- A deadly overnight fire raced through a 24-story apartment tower in London on Wednesday, killing at least 12 people and injuring 74 others. One desperate woman threw a baby out of a high window and a man on the ground managed to catch the child, a witness said.

Flames from the inferno lit up the night and black smoke spewed from the windows of the Grenfell Tower in North Kensington where more than 200 firefighters battled the blaze. A plume of smoke stretched for miles (kilometers) across the sky after dawn, revealing the blackened, flame-licked wreckage of the building, which was still burning over 12 hours later.

"This is an unprecedented incident,'' Fire Commissioner Dany Cotton told reporters. ``In my 29 years of being a firefighter I have never, ever seen anything of this scale.'' 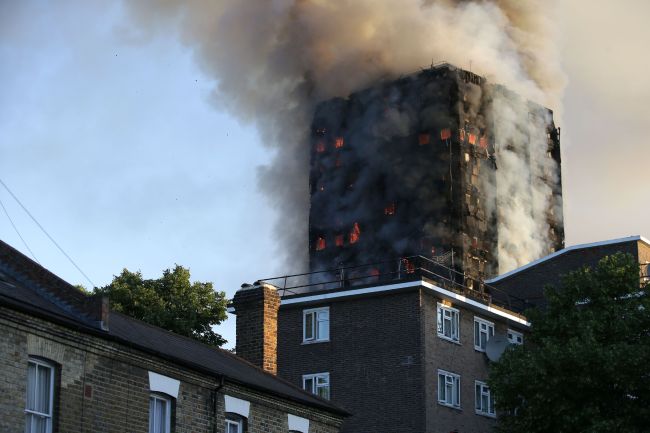 Smoke billows from Grenfell Tower as firefighters attempt to control a huge blaze on June 14, 2017 in west London. (AFP-Yonhap)
She told reporters she feared firefighters would find more victims still inside the building.

People in apartments enveloped by the quickly advancing flames and thick smoke banged on windows and screamed for help to those watching down below, witnesses and survivors said. One resident said the fire alarm did not go off.

Police commander Stuart Cundy gave the death toll but added the figure was likely to rise "during what will be a complex recovery operation over a number of days.''

Paul Woodrow, head of operations for the London Ambulance Service, said 20 of the injured were in critical condition.

The London Fire Brigade received the first reports of the fire at 12:54 a.m. and the first engines arrived within six minutes, Cotton said.

There was no immediate word on the cause of the blaze, but angry residents said they had warned local authorities about fire issues at Grenfell Tower. The public housing block of 120 apartments was built in 1974 and recently upgraded at a cost of 8.6 million pounds ($11 million), with work finishing in May 2016, according to the Royal Borough of Kensington and Chelsea.

Samira Lamrani, a witness, said a woman dropped a baby from a window on the ninth or 10th floor to people on the sidewalk.

"People were starting to appear at the windows, frantically banging and screaming,'' Lamrani said, adding the woman gestured that she wanted to drop a baby.

"The flames, I have never seen anything like it, it just reminded me of 9/11,'' said Muna Ali, 45. ``The fire started on the upper floors ... oh my goodness, it spread so quickly. It had completely spread within half an hour.''

Other witnesses described a white, polystyrene-type material falling like snow from the building as it burned. Some feared the charred tower block might collapse but a structural engineer said the building was not in danger, London Fire Brigade said, adding "it is safe for our crews to be in there.''

Ruks Mamudu, 69, escaped from her first floor apartment wearing only her purple pajamas and bathrobe. She and her grandson sat outside the building and watched people trapped on higher floors cry desperately for help. 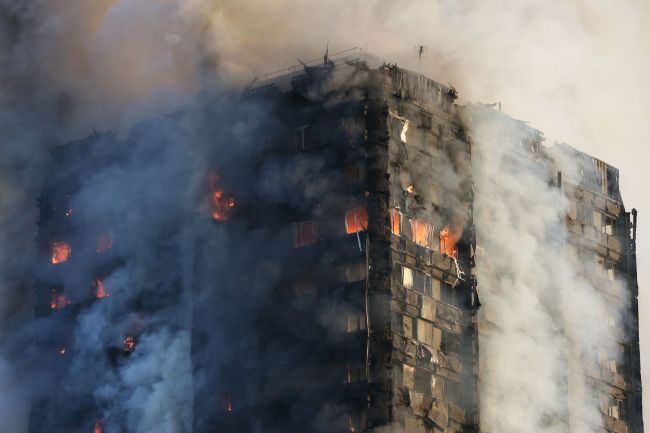 The massive fire ripped through the 27-storey apartment block in west London in the early hours of Wednesday, trapping residents inside as 200 firefighters battled the blaze. (AFP-Yonhap)
"I sat there watching my house burn down and watching people cry for help who couldn't come down,'' she said.

People at the scene spoke of being unable to reach friends and family inside. Others said they could see people inside using flashlights and mobile phones to try to signal for help from higher floors.

Nassima Boutrig, who lives opposite the building, said she was awakened by sirens and smoke so thick that it filled her home as well.

"We saw the people screaming,'' she said. ``A lot of people said `Help! Help! Help!' The fire brigade could only help downstairs. It was fire up, up, up. They couldn't stop the fire.''

The disaster occurred 10 days after a terror attack at London's Borough Market. Some residents initially feared the fire was also terror-related, though authorities discounted that possibility. 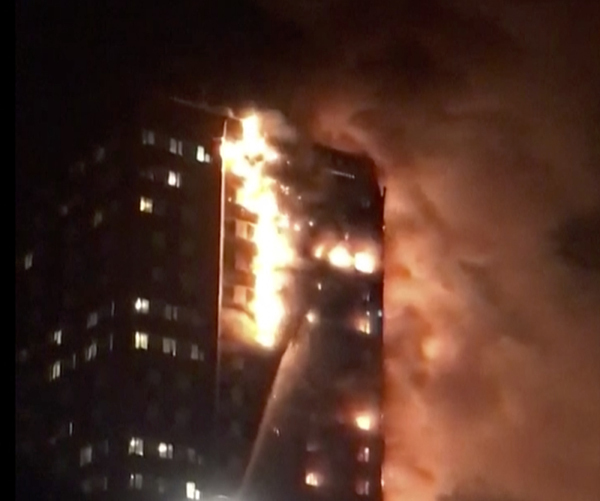 A building is on fire in London, Wednesday, June 14, 2017. Firefighters are battling a massive fire in an apartment high-rise in London. One side of the building appeared to be in flames. (AP-Yonhap)

Edward Daffarn, a 55-year-old who lived on the building's 16th floor, said the fire alarm didn't ring.  Daffarn said residents had complained for years to London City Council about building safety, to no avail.

"I'm lucky to be alive.  A neighbor's smoke alarm went off and another neighbor phoned and told me to get out,'' he said. "I consider this mass murder.''

The Grenfell Action Group, a community organization formed to oppose a nearby redevelopment project, has been warning about the risk of fire at Grenfell Tower since 2013.  The group has raised concerns about testing and maintenance of firefighting equipment and blocked emergency access to the site.

"All our warnings fell on deaf ears and we predicted that a catastrophe like this was inevitable and just a matter of time,'' the group said in a blog after the fire broke out.

A July 2014 newsletter for residents said the building was designed "according to rigorous fire safety standards'' and recommended that in case of a fire residents should stay inside their apartments.

The British company that carried out the tower's 2016 refurbishment, Rydon, said in a statement its work "met all required building control, fire regulation, and health and safety standards.''

London Mayor Sadiq Khan said many questions now need to be answered about tower blocks around the city.

"There will be a great many questions over the coming days as to the cause of this tragedy and I want to reassure Londoners that we will get all the answers,'' Khan said.

Prime Minister Theresa May's Downing Street office said she was "deeply saddened by the tragic loss of life in the Grenfell Tower and is being kept constantly updated on the situation.'' (AP)