The volume of household loans increased by 10 trillion won ($8.9 billion) in May this year, according to data from the Financial Services Commission. In the same month last year, the volume had risen by 11.9 trillion won.

Among household loans in May, those extended by commercial lenders and trust banks surged 6.3 trillion won. Loans by nonbanking lenders saw their increase slow down more significantly, rising 3.7 trillion won. 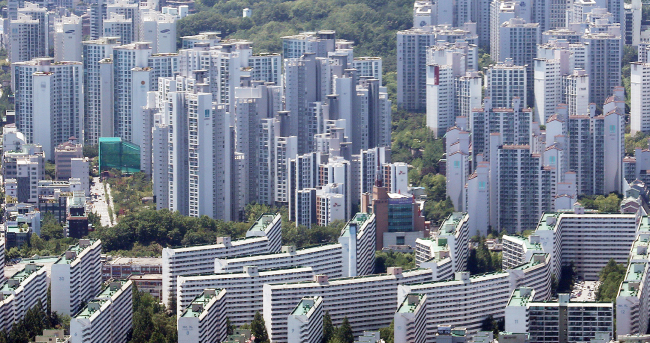 (Yonhap)
On a monthly base, May showed the fastest increase so far this year, as the comparative figure for April was 7.2 trillion, the previous highest for the year.

The FSC attributed the rise to seasonal factors, such as growing demand for housing that is typical at this time of the year. The state-run regulator also warned of a fallout from the looming June hike by the US Federal Reserve, and the latest surge in housing prices and home transactions in certain districts.

According to the Bank of Korea, mortgage loans including policy mortgage, offered by banking institutions, climbed up 3.8 trillion won in May. Other forms of household loans, such as credit loans and overdrafts, rose 2.5 trillion won.

While both increases were larger than April, they were smaller than in May of the previous two years at some 7 trillion won. The latest figure was also still high compared to between 2010 and 2014, when it had stood at some 3 trillion won.

Outstanding household loans climbed to 724.8 trillion won as of the end of May, while overdue mortgage loans rose to 545.5 trillion won, taking up 75.3 percent of the total volume of loans.

Data from the central bank also showed home transactions in Seoul was the highest in May, at some 10,000, up some 2,000 from April.

Household loans began to rise at a faster pace in 2015. This came months after the former Park Geun-hye administration eased regulations on household borrowing in June 2014, which is seen as the culprit behind the excessive borrowing for home purchases and speculation in the real estate market.

Snowballing household loans, especially mortgage loans, have driven up household debt, which reached 1,344.3 trillion won as of the end of 2016, according to the central Bank of Korea.