Sportswear manufacturer Adidas will bring Wiggins, who is with the Minnesota Timberwolves, to South Korea from July 21 to 24.

Adidas said the Canadian basketball star's visit is solely designated for South Korean fans as he will not make a stop in other Asian cities. 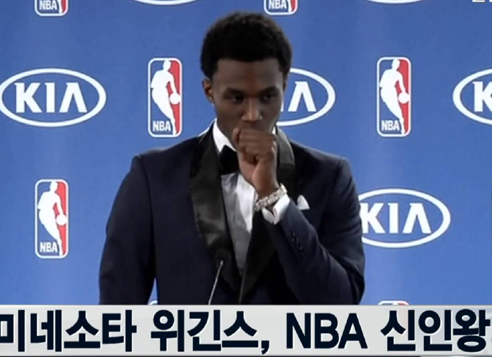 (Yonhap TV)
"It's meaningful that Wiggins will visit only for South Korean fans, and it's not just one of those part of Asian tour visits," an official with Adidas said in a release. "The player also has high expectations for his first South Korea visit, so we will prepare various programs and activities with local fans."

Wiggins, who was selected first overall in the draft by the Cleveland Cavaliers in 2014, will hold clinics for young players and take part in a 3-on-3 game here, according to Adidas. The 22-year-old small forward joined the Timberwolves following a three-team trade in summer 2014 and was named the NBA's Rookie of the Year for the 2014-15 season.

For this past season, he averaged 23.6 points with four rebounds per game in 82 games.

Wiggins' visit comes ahead of another NBA star's visit next month. The US-based athletics apparels brand Under Armour previously announced that the two-time NBA MVP Stephen Curry of the Golden State Warriors will stay in South Korea from July 26 to 28 as part of the company's summer Asian tour. (Yonhap)