WASHINGTON -- The American college student just freed from a long detention in North Korea is in a coma, his parents were quoted as saying Tuesday, a surprise that could further complicate the already tense relations between the two countries.

Otto Warmbier, a 22-year-old University of Virginia student, was released after 17 months of detention in the communist nation. His parents later told the Washington Post that their son was being transported on a US military plane in a coma.

The parents were also quoted as saying that North Korean officials informed them via US envoys that Warmbier fell ill from botulism sometime after his trial in March last year and fell into a coma after taking a sleeping pill. 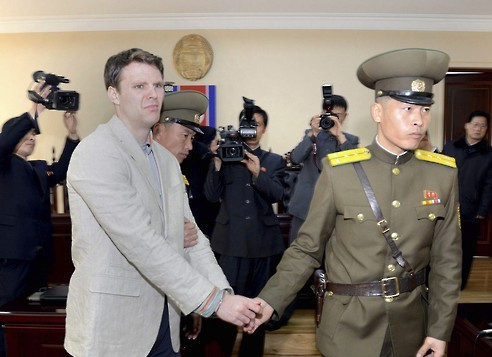 (Yonhap)
Earlier, US Secretary of State Rex Tillerson announced Warmbier's release, but made no mention of his condition.

"At the direction of the President, the Department of State has secured the release of Otto Warmbier from North Korea. Mr. Warmbier is en route to the United States, where he will be reunited with his family," Tillerson said in a statement.

"The Department of State continues to have discussions with the DPRK regarding three other US citizens reported detained. Out of respect for the privacy of Mr. Warmbier and his family, we have no further comment on Mr. Warmbier," he said.

The North first informed the US Monday last week that Warmbier is in a coma, and President Donald Trump was immediately informed of the fact and ordered his medical evacuation, according to the Washington Post. The US special representative for North Korea policy, Joseph Yun, traveled with doctors to Pyongyang on a military medical plane to bring Warmbier home, the report said.

On Tuesday morning, Tillerson reported to Trump that Warmbier is on the way home, and the last instruction Trump gave was: "Take care of Otto," the paper quoted a senior administration official as saying. 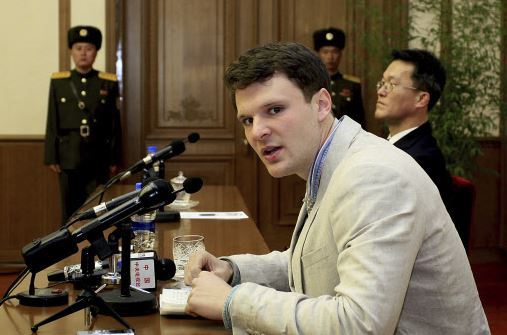 In this Feb. 29, 2016 file photo, American student Otto Warmbier speaks to reporters in Pyongyang, North Korea. Secretary of State Tillerson said Tuesday, June 13, 2017, that North Korea released the jailed U.S. university student. (AP-Yonhap)
It was unclear if the North's claim was credible and why the regime held Warmbier for more than a year even after he fell into a coma. But the development is sure to significantly deteriorate the already bad relations between Washington and Pyongyang.

State Department spokeswoman Heather Nauert said the US is pleased to have Warmbier back home. But she declined to talk about his health conditions, saying it goes against State Department guidelines.

Warmbier's release coincided with a visit to the North by NBA Hall of Famer Dennis Rodman, but Nauert said that the two cases have nothing to do with each other.

She also urged Americans not to visit the North.

Warmbier was arrested in January 2016 for stealing a political propaganda sign from a hotel and was sentenced to 15 years of hard labor. His release brought to three the number of Americans held in the North.

The three other detainees are all Korean-American men. Two of them, Kim Hak-song and Kim Sang-dok, were detained earlier this year, while the third, Kim Dong-chul, was arrested in October 2015 and sentenced to 10 years of hard labor on charges of espionage and subversion.

American visitors have often been detained in North Korea on charges of anti-state and other unspecified crimes. The widespread views are that the communist nation has used the detentions as bargaining chips in its negotiations with Washington.

Kenneth Bae, a Korean-American missionary, served two years of detention in the North before being released in November 2014 when then-US Director of National Intelligence James Clapper made a secret trip to Pyongyang to win his release and that of another US detainee. (Yonhap)