A White House statement said the two leaders will meet June 29-30 to discuss ways of building on what America frequently calls its "ironclad"  alliance with South Korea.

Moon, a center-left politician who was sworn in last month after a landslide election win, favors engagement with the North to bring it to the negotiating table, rather than the hardline stance taken by the conservative government of his ousted predecessor Park Geun-hye.

Trump too has signalled a willingness to try a different tack with North Korean leader Kim Jong-un. 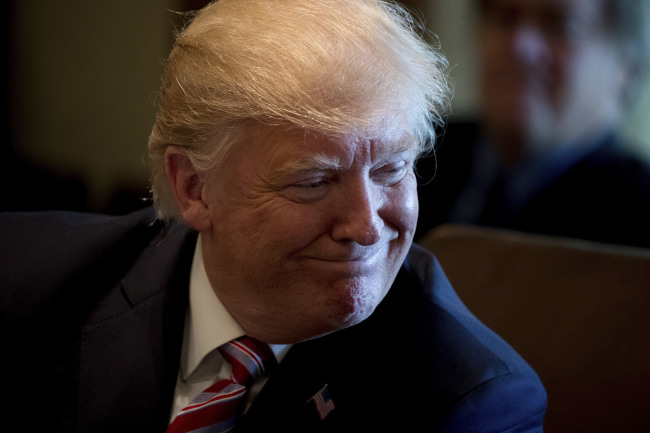 US President Donald Trump (Yonhap)
Though he often denounced China on the campaign trail, Trump is now leaning on Beijing to help rein in its ally North Korea's weapons program, a move that has sparked anguish among Asian allies who fret China might exact a quid pro quo to make Washington go easy on other regional issues.

News of the talks comes as Trump's top military officials, Pentagon chief Jim Mattis and General Joe Dunford, the chairman of the Joint Chiefs of Staff, told lawmakers that the threat from North Korea has not diminished.

Mattis called North Korea the "most urgent and dangerous threat" to peace and security, and said its continued pursuit of nuclear weapons and the means to deliver them has increased in pace and scope.

"The regime's nuclear weapons program is a clear and present danger to all, and the regime's provocative actions, manifestly illegal under international law, have not abated despite United Nations' censure and sanctions," the defense chief said in written testimony to the Senate Armed Services Committee on Tuesday morning.

Dunford underscored these concerns and said North Korea has "demonstrated a willingness" to use malicious cyber tools against governments and industry.

Pyongyang has test-fired a string of missiles this year, building on launches and atomic tests that have ratcheted up tensions over its quest to develop weapons capable of hitting the United States -- something Trump has vowed "won't happen."

Trump and Moon will likely discuss a controversial US missile defense system that has been installed in South Korea to guard against North Korean missile threats.

Though parts of the Terminal High-Altitude Area Defense system are already in place, Moon last week suspended further deployment following a furious campaign of economic sanctions and diplomatic protests by Beijing against the US missile shield, dealing a blow to Washington's regional security policy.

Officially, the delay is to allow for a new, comprehensive environmental impact assessment, but analysts say the move is a strategic delay by Moon to dodge the tricky diplomatic situation he inherited.

Trump and Moon will seek to "advance cooperation on economic and global issues" and "will also coordinate on North Korea-related issues, including countering the growing North Korean nuclear and missile threats," the White House statement read.

Despite tough talk from the Trump administration, officials accept they have no easy options when it comes to dealing with North Korea militarily.

"It would be a war like nothing we have seen since 1953," Mattis said Monday, pointing to the end of the Korean War. "It would be a very, very serious war."