The dollar-won volatility eased in May from a month earlier in line with a more stable global financial market, central bank data showed Tuesday.

The session-over-session changes in the dollar-won exchange rates averaged 0.41 percent in May, compared to 0.43 in April, the Bank of Korea said in a statement. 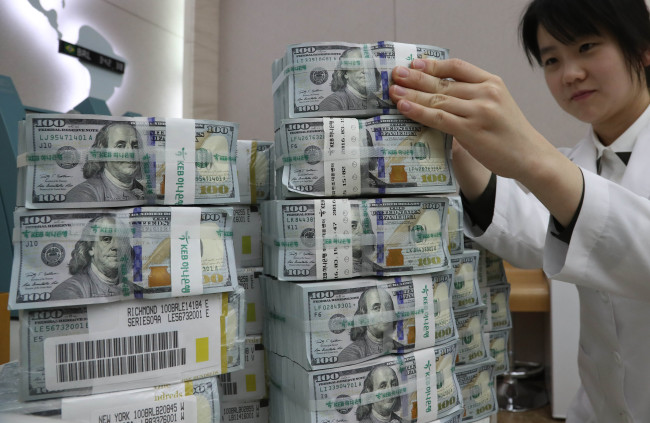 (Yonhap)
"The won rose against the dollar in May due to bullish local stock markets and political uncertainty in the United States," the statement said.

On Friday, South Korean stocks closed at a record high as investors' sentiment was boosted by receding global uncertainties.

The benchmark Korea Composite Stock Price Index advanced 0.77 percent to 2,381.69. It marked the first time that the Kospi closed at 2,380 levels.

Meanwhile, the Korean currency posted 5.5 won in daily value changes against the dollar in May, down from 7.4 won a month earlier, it said.

Foreign investors poured a net $5.27 billion into the local financial markets -- $3.36 billion in stocks and $1.91 billion in bonds -- in May, the BOK said. It was up from foreign injections worth $2.2 billion a month earlier.

The credit default swaps premium for foreign exchange stabilization bonds came to 57 basis points in May, up from 56 basis points a month earlier, the BOK said. (Yonhap)