In “Counterparts,” Gwangju Performance Project is staging two one-act plays in a tiny black box theater with a minimalist set and only four actors between them.

It’s a change of pace for the theater company that usually uses a large cast in its productions. For instance, last year, it employed elaborate sets and tightly choreographed ensemble numbers in its musical rendition of “Little Shop of Horrors.” 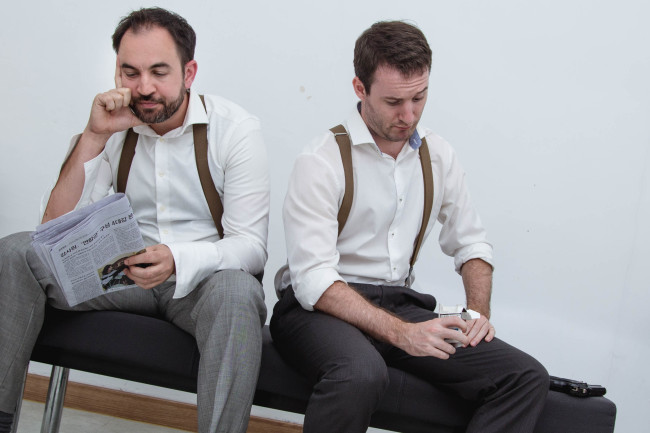 Nate Rockefeller (left) and Jack George appear in the Gwangju Performance Project’s “Counterparts.” (Ben Robins)
David St. John, the director of the first play, Harold Pinter’s “The Dumb Waiter,” says the decision to strip the production value back was deliberate, so the nuances of both plays could be truly appreciated.

“It’s more about the subtly of the acting,” he says. “We wanted something a little more low-key and rewarding this time that would have people not just talking but thinking for long afterwards too.”

The US expat says he sensed the play, which sees two hit men awaiting their next assignment while stuck in a sparsely furnished and windowless basement, would resonate with local audiences from the first time he picked up the script.

“Pinter’s is a complicated play, dense with symbolism and class struggle,” he says. “It’s about domination and submission; a great example of the French absurdist idea that human existence is meaningless and fails at every turn.”

To counter this “atmosphere of menace,” he says, the second play, Jane Shepard’s “Commencing,” is much brighter, while still being a “richly imagined and thoughtful” piece of work.

Ashley Johnson is one-half of the all-female cast of the play, which features the story of a straight woman excited to go on a blind date her friends have organized, only to later find out her date is one very disappointed (and confused) lesbian. Comedy ensues as the pair unpack the absurdity of straight and gay women’s culture, against the backdrop of a nostalgia-inducing 1990s-style living room set. 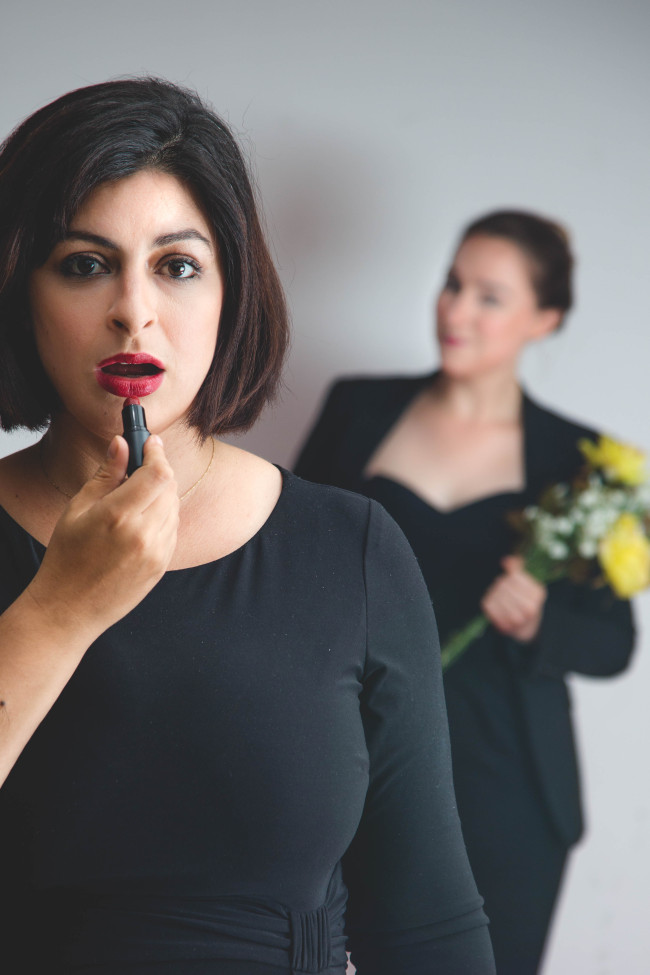 Anissa Ghali (foreground) and Ashley Johnson appear in the Gwangju Performance Project’s “Counterparts.” (Ben Robins)
She says the unique contrast in “energies” between the all-male and all-female casts will leave audiences wanting more.

“We’ve got this intriguing little balance between the masculine and the feminine that I think will be fresh and exciting for the community,” she says.

While the actress has never worked with such a small cast before, she believes she has gained a deeper understanding of character and more fluid, natural, interactions due to fine-tuning scenes with only one other person.

“There’s a direct sort of intimacy you’ll get with such a small cast that makes you feel more like you’re immersed in a real life moment,” she says.

“What I love so dearly about ‘Counterparts’ is that there is a beautiful blend of light and dark, comedy and tragedy all flowing together in a lovely blur. It mimics the ups and downs of real life and the joys and heartaches we experience along the way, and how we come to terms with them on our own and with the help of others.”

“Counterparts” will run at Gwangju Art Hall beginning Saturday at 3 p.m for a total of six shows. Admission is 10,000 won in advance and 12,000 won at the door. For more information, search for the event page “GPP Presents: Counterparts” on Facebook.