South Korea's vice defense minister recently made a visit to the deployment site of a US missile defense system amid political controversy here, an official said Tuesday.

Suh Choo-suk, who took office last Wednesday, is a member of the inter-agency task force to follow up President Moon Jae-in's call for a review of "domestic procedures" associated with the deployment of THAAD at a former golf course in Seongju, North Gyeongsang Province, some 300 kilometers southeast of Seoul. 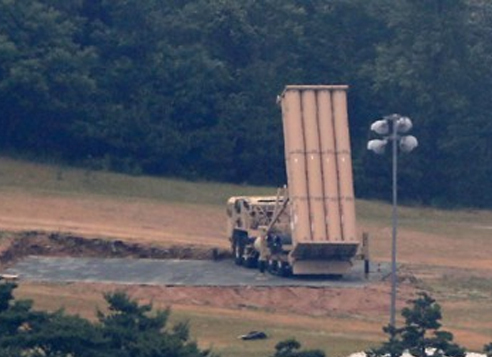 A THAAD interceptor launcher is deployed at a former golf course in Seongju, North Gyeongsang Province, on June 7, 2017. (Yonhap)
"He visited the THAAD site in Seongju on Sunday," the government official said, requesting anonymity.

The visit was intended to get more information on the THAAD deployment by the US Forces Korea, he added.

The Moon administration is seeking a new process of evaluating the possible environmental impact from the THAAD operation.

Moon's aides stressed that the government is not trying to reverse the allies' agreement itself on positioning THAAD on the peninsula. The primary aim is to enhance procedural transparency, they said.

Moon is scheduled to hold his first summit talks with US President Donald Trump in Washington D.C. later this month. (Yonhap)