Having already surpassed his previous career home run total in 2017, SK Wyverns' outfielder Han Dong-min has emerged as the biggest -- and also the unlikeliest -- power threat in South Korean baseball.

Prior to Tuesday's action, Han found himself leading the Korea Baseball Organization with 20 home runs and a .685 slugging percentage. He's tied with NC Dinos' Xavier Scruggs for the league lead with 49 RBIs, though Han has driven in those runs in 228 plate appearances, 28 fewer than Scruggs.

Before this breakout campaign, Han, 27, had been a part-time player. He had all of 17 home runs in 179 games in his four previous KBO seasons. 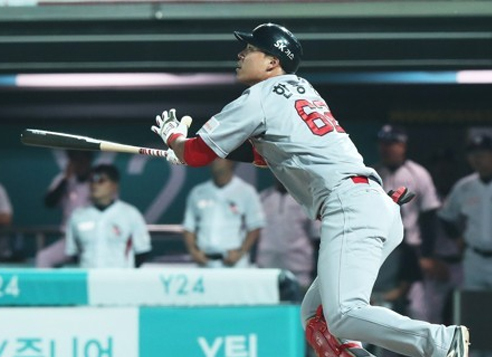 In this file photo taken on May 31, 2017, Han Dong-min of the SK Wyverns watches his three-run home run against the KT Wiz in a Korea Baseball Organization regular season game at KT Wiz Park in Suwon, Gyeonggi Province. (Yonhap)
He did enjoy an impressive run while fulfilling his military duty with Sangmu in the Futures League, the KBO's minor league. Han led the competition in home runs in both 2015 and 2016, hitting 21 and 22 long balls apiece.

And this year, Han is finally realizing the potential that saw him go deep 14 times in 99 games with the Wyverns four years ago.

"I've surprised myself with these numbers," Han said Monday. "I don't think I've fully matured as a hitter just yet, but serving in the military at a relatively advanced age proved to be a turning point."

Specifically, Han said he got plenty of playing opportunities in the minors, and credited his Sangmu coaches with helping his mental game.

"Those coaches were always encouraging, and they advised me to start studying the mental side of baseball," Han said. "And I am no longer the worrier at the plate that I was before. I tell myself, 'If I don't hit well today, I can always try to do better tomorrow.'"

Han, who bats left-handed, said he's trying to model his swing after that of Kim Jae-hwan, a Doosan Bears' slugger who also hits from the left side.

Kim, a year older than Han, enjoyed his own breakout campaign in 2016. Kim hammered 37 home runs and knocked in 124 runs in 134 games last year, after hitting just 13 homers with 44 RBIs in 157 games over five previous seasons.

"You can't play baseball with brute force alone," Han said. "I watch Jae-hwan's swings to figure out how he can be so explosive. My swing isn't all that pretty but he has such a gorgeous one."

Han said being an everyday player in the KBO for the first time has begun to take its toll on his 190-centimeter, 95-kilogram body.

"I started to hit the wall a bit in the middle of last month," he said. "I think I may slow down as the weather gets hotter, but I'll try to find ways to beat slumps and stay consistent." (Yonhap)