In a report on the impact of lending rules and household debt, the Korea Economic Research Institute  warned against stricter regulations involving the debt-to-income ratio as changes will force borrowers spend less and further drag down the already fragile economy. 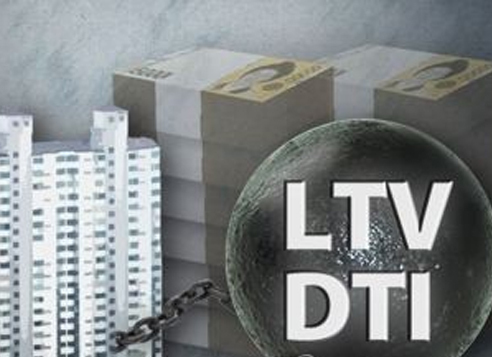 (Yonhap)
"In South Korea, home prices are higher than the norm for an economy of this size and most households cannot afford to buy a house with their own income," KERI researcher Lee Seung-seok said in the report.

A rise in rates will make it harder for middle and low-income households to borrow that will force them to consumer less, while those that want to buy a house won't be able to do so under stricter DTI rules. Such a development will cause the economy to shrink further, Lee said.

He advised the government to "gradually" carry out strengthened DTI regulations to avoid shocking Asia's fourth-largest economy that is struggling with sluggish growth.

The government eased the loan-to-value and DTI ratios in 2014 to allow home buyers to borrow up to 70 percent of their property value and 60 percent of their income for mortgage payments. Eased regulations resulted in a sharp rise of household debt in recent years with household credit jumping 11 percent year-on-year to 1,359.7 trillion won ($1.2 trillion) at the end of the first quarter.

This has raised concerns that excessive household debt could result in massive non-performing loans in case of interest rate hikes and spark another financial crisis. (Yonhap)