With the investigation to determine the cause underway, the Korea Electric Power Corp. said the latest power failure appears to be from problems in the switchgear of the Yeongseo Substation located in Gwangmyeong, Gyeonggi Province. 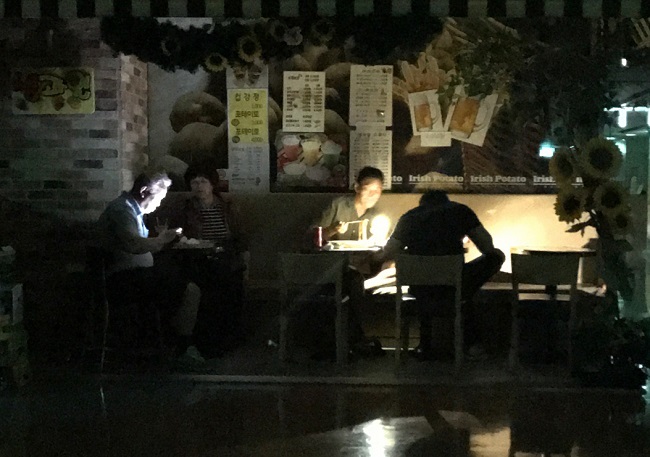 Diners at a restaurant eat in the dark after a power failure at Techno Mart in southwestern Seoul on Sunday. (Yonhap)
The company apologized for the disruption in the electrical power supply and inconveniencing people.

“All responsibility for the blackout lies with Kepco and we would like to apologize to citizens who suffered tremendous inconvenience while enjoying their rest and leisure time on a Sunday,” Cho Hwan-eik, head of Kepco, said in a statement.

Although power was restored about 20 minutes later, authorities said the company will monitor the damage caused by the blackout and swiftly compensate those who were affected.

The latest blackout was the second-largest to hit the country since September 2011.

Firefighters said that a number of citizens reported an inconvenience after some of them were trapped inside elevators at a shopping complex in Sindorim during the power outage. Others rushed outside the building in surprise.

Daegu also experienced a similar blackout. The power was cut off around 5 p.m. and restored 16 minutes later.