South Korea's trade surplus with the United States has been on a steady decline for the past 13 months amid the Seoul government's efforts to reduce the imbalance, customs data showed Sunday.

A trade surplus with the world's largest economy reached $915 million last month, more than halving from $2 billion tallied a year ago, according to the data compiled by the Korea Customs Service. 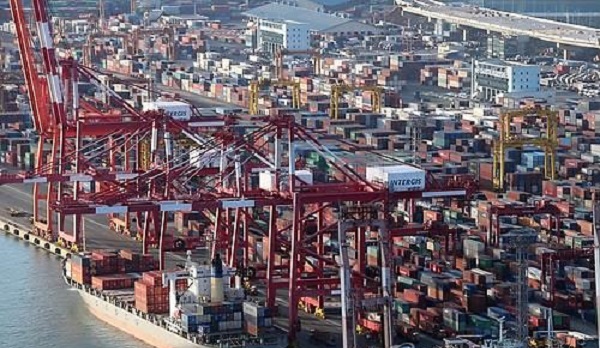 (Yonhap)
The monthly numbers have been falling since May last year when they backtracked 14.9 percent on-year to $1.78 billion.

In particular, for the first five months of 2017, South Korea posted $6.9 billion in trade surplus with the US, down 36.7 percent, or $4 billion, from a year earlier.

The decline came as South Korea's imports from the US have expanded more sharply than exports over the cited period.

Imports soared 21.8 percent on-year to $21.2 billion on a 130.5 percent surge in semiconductor facilities and a 46.7 percent rise in aircraft and components in the January-May period, while exports inched down 0.8 percent to $28.1 billion.

Seoul has been trying to reduce its surplus with the large North American country that reached $25.8 billion in 2015 and $23.2 billion in 2016 as the Trump government has blamed the two-way free trade pact for destroying jobs.

The massive surplus has also been under fire from the US government, which could designate South Korea as a currency manipulator in October. (Yonhap)