Kim's appointment came only hours after a parliamentary committee issued a report on the outcome of its confirmation hearing for Kim.

The new finance minister will be double-hatted as a deputy prime minister for economy. 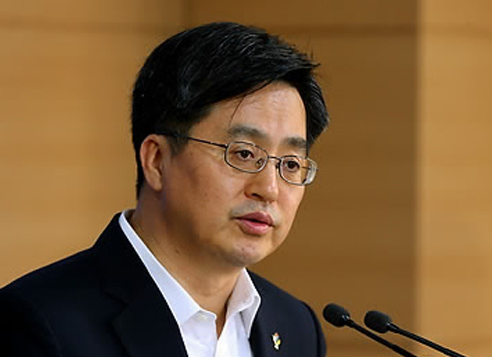 New finance minister Kim Dong-yeon (Yonhap)
Kim, a former vice finance minister, is only the second new Cabinet member to be appointed since the Moon administration was inaugurated May 10. The first was Prime Minister Lee Nak-yon.

President Moon has said he would have to replace all 19 Cabinet members appointed by his ousted conservative predecessor Park Geun-hye, but he has only been able to name seven amid strong objections from opposition parties against some of his earlier picks.

All major opposition parties have expressed their opposition to Kang, while the main opposition Liberty Korea Party says Kang's appointment despite its opposition will mean the end of any cooperation for the new administration.

The presidential office Cheong Wa Dae, however, continued to plead with the opposition parties for their endorsement of Kang.

"(We) sincerely ask you to help Kang open a new era in our diplomatic relations based on her experience at the United Nations," Cheong Wa Dae spokesman Park Soo-hyun told a press briefing Friday, partly citing an apparent lack of time to field a new foreign minister-nominee before the Korea-US summit scheduled to be held in Washington later this month. (Yonhap)