Nearly half of South Korea's top 30 family-controlled conglomerates slashed their workforces in 2016 from a year earlier, data showed Friday, amid unfavorable market conditions at home and abroad.

The combined workforce of the 30 leading business groups came to 1,305,939 as of the end of last year, down 1.1 percent, or 15,069, from a year earlier, according to the data from market tracker Chaebul.com. 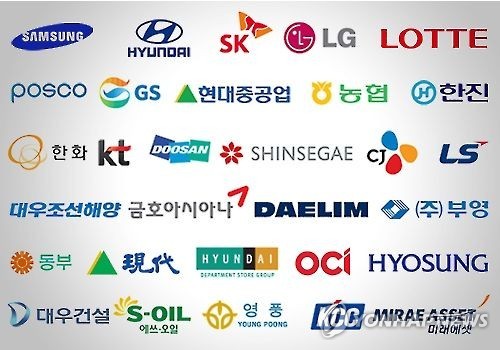 Of the total conglomerates known as chaebol here, Samsung, Hyundai Heavy Industries, POSCO, LG and eight others trimmed their payrolls over the cited period.

Samsung's job cut was the largest with 12,227. The total workforce of its subsidiaries dropped 4.8 percent on-year to 241,797 last year. Samsung's workforce fell for the second consecutive year since the group launched a full-fledged drive to overhaul its business operations in 2015.

In contrast, retail-oriented conglomerates added to their workforces during the period. Shinsegae Group recorded the largest gain, with its workforce climbing 6.5 percent, or 3,569 workers, to 58,704 at the end of last year. (Yonhap)