YG, the agency which Big Bang is signed to, saw share prices drop sharply around 2:40 p.m., when the first report of T.O.P’s use of the illegal substance was released. Prices closed at 33,000 won ($30), down 4.2 percent from a trading session earlier.

Trade volume of YG stocks, which ranged between 30,000 and 40,000 during the first five trading hours on the day, catapulted up to around 240,000 by the time the market closed.

T.O.P is currently serving his mandatory military service as a conscripted police. 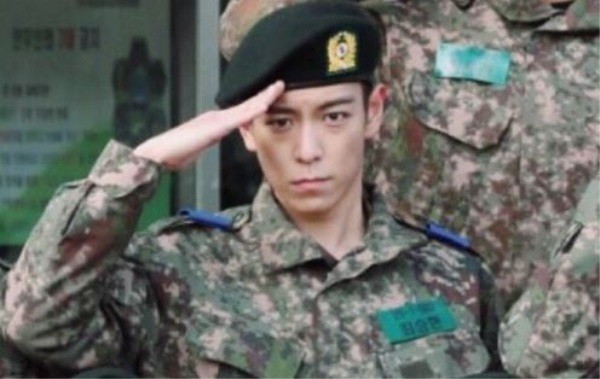 (Army Training Center)
According to the Seoul Metropolitan Police Agency’s drug crime unit, a physical test taken prior to T.O.P’s enlisting came out in early April showing the star tested positive to illegal drug use.

T.O.P had initially denied the accusation, saying he had merely smoked a vapor cigarette, but later admitted he had indeed smoked weed and that he was sincerely sorry.

YG Entertainment followed up with an official apology. The case has been passed to the prosecution for review.

On the same day, G-Dragon teased the poster for his new album, slated to release a week later, but hardly received any attention.