According to the International Institute for Management Development, a Switzerland-based private business school, Korea’s global competitiveness ranked at No. 29 in 2017, the lowest since 2008 when the economy was 31st. 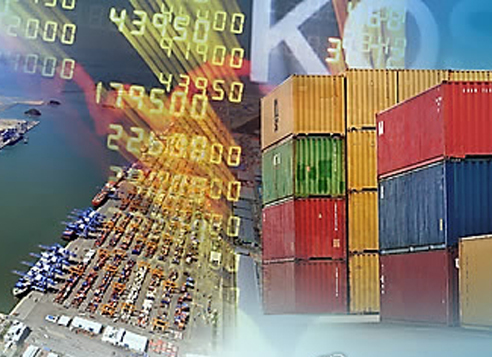 (Yonhap)
Among 14 countries in the Asia-Pacific region, South Korea ranked 10th this year, unchanged from the previous year.

The IMD’s World Competitiveness Ranking is updated every year based on a country’s economic achievements, government efficiency, corporate efficiency and infrastructure.

In terms of economic achievements, Korea’s ranking dropped to 22nd place in 2017 from 21st last year, largely due to weak exports.

Korea’s government efficiency also declined to 28th place from 26th over the cited period, with bribery and corruption rankings falling to 40th place from 34th. In March, former President Park Geun-hye was officially ousted for her role in the bribery and influence-peddling scandal involving her longtime friend, presidential aides and business tycoons.

Korea’s corporate efficiency rose by four places to No. 44, but it received the lowest ranking in four major criteria in 2017. The nation’s ranking in relations between labor and management fell to 62nd place from 59th on-year. The effectiveness of the boardroom’s check in management went down to 63rd from 61st and the appropriateness of accounting and audit also fell to 63rd. 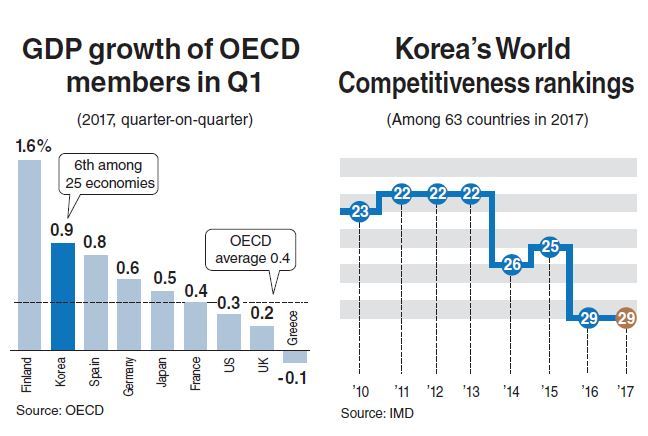 The Swiss institute suggested that the Korean government minimize uncertainties in structural reforms, create more quality jobs for youth and accelerate reforms in the labor and corporate sector.

Meanwhile, Korea’s economic growth in the first quarter was relatively robust among members of the Organization for Economic Cooperation and Development.

While OECD economies grew 0.4 percent on-quarter in the first quarter, down from 0.7 percent growth in the fourth quarter, Korea’s first-quarter growth rose to 0.9 percent from the previous quarter.

Korea’s faster growth was attributed to a turnaround in exports, which saw 1.9 percent expansion in the first quarter from 0.1 percent contraction in the fourth quarter.

The Bank of Korea recently said it may revise up the nation’s 2017 growth forecast in July, above the April projection of 2.6 percent, citing robust exports and investment.