[ The Korea Herald – Send E-mail ]
Manufacturing sentiment edges down
By Korea Herald
Published : May 31, 2017 - 14:32
Updated : May 31, 2017 - 17:09
South Korea’s manufacturing sentiment inched down in May from the previous month, the first decline in nine months, as producers were psychologically pressured from reduced business days with more holidays in May, the Bank of Korea said Wednesday.

The business survey index in the manufacturing sector dropped to 82 in May from 81 in April. The index remained low at 71-72 from August to December but began to rise in earnest from 75 in January to 83 in April with robust exports. The manufacturing sentiment was the highest at 82 in April in almost five years. 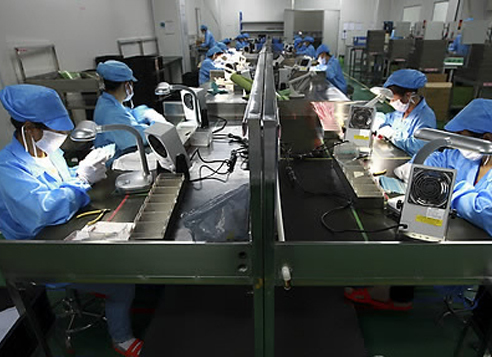 (Yonhap)
A reading below 100 in the BSI means pessimists outnumber optimists.

The BSI for this month was surveyed on 3,313 companies across the nation during May 17-24 and 2,850 firms responded to the survey, the BOK said.

A BOK official said the drop in the index in May seemed to be only temporary.

“There were frequent holidays in May that caused a decline in business days. The fall seems to be a temporary adjustment after a short-term rise,” said Choi Deok-jae, head of corporate statistics team at the BOK.

Over the long term, the BSI seems is actually on the rise, as the May figure is still above the level of the long-term average, which was 80 between January 2003 and December 2016, he said.

Among the manufacturers, the sentiment index among exporters rose by 2 points to 88 in May, while that among companies in domestic demand fell by three points to 78.

By sector, electronics, display and communication equipment went up 5 points to 98 but chemicals plunged by 11 points to 93. Primary metals also plummeted by 13 points to 75.

Manufacturers cited lackluster domestic demand and uncertain economic circumstances as the most difficult factors in running a business, the BOK’s survey showed.