[ The Korea Herald – Send E-mail ]
Merit pay system destined to be derailed
By Korea Herald
Published : May 31, 2017 - 14:31
Updated : May 31, 2017 - 17:43
Confusion is growing over the implementation of a merit pay system at public organizations in the country, as President Moon Jae-in and his aides are pushing to repeal the measure introduced under previous administrations.

During his campaign for the May 9 presidential election, Moon pledged to immediately abolish the performance-based wage system if he became president.

Kim Jin-pyo, head of a commission functioning as the de facto transition team of the new administration, said last week that work would be undertaken on abolishing the system. 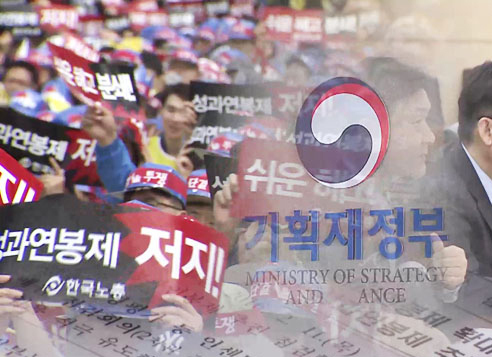 (Yonhap)
The Ministry of Strategy and Finance, which oversees state-funded institutions, recently loosened its firm stance on implementing the wage scheme based on achievements.

Ministry officials are now working to revise guidelines for running the system, considering excluding it from criteria for evaluating the management of public organizations.

Moon and his aides have been pressing bureaucrats to be in tune with their policy agenda. Last week, a local employers’ group was subject to a rebuke from the president for criticizing his plan to turn all irregular jobs in the public sector into regular ones.

The merit salary system was first applied to executive members of public organizations in 2010 under President Lee Myung-bak’s administration as part of efforts to improve efficiency of the public sector.

His successor Park Geun-hye’s government pushed to expand the scheme to all employees at 119 public firms and institutions last year.

Among them, 71 adopted the system through labor-management agreements and the other 48 introduced it by board decisions without gaining consent from workers.

So far, labor unions of about 30 public organizations have sought a court injunction against the new wage structure, arguing their management unilaterally introduced it.

Their petition was upheld by a court ruling earlier this month that said the introduction of the merit pay system without a labor agreement was invalid.

Under the changed atmosphere after Moon took office, some labor groups that agreed to adopt the system are moving to discard their agreements with their organizations’ management.

Unionized workers of Korea Electric Power Corp., the country’s largest public corporation with more than 22,000 employees, plan to discuss whether to reconsider their agreement on changing their wage scheme during a meeting to be held this week.

Their decision is set to affect the course of actions by labor groups of other public organizations.

Experts say Moon and his aides may be critical of the high-handed way the Park administration pushed for the introduction of the achievement-based wage system, but they should be cautious on scrapping it altogether.

They note it is necessary to maintain the system at public entities where labor groups have accepted it.

“What is a labor-management agreement for, if it is allowed to be nullified whenever a new government is installed?” said Cho Joon-mo, a professor of economics at Sungkyunkwan University.

The abolition of payment based on achievements would bring disadvantages to some high-performing employees, who expect to receive additional payment next month under the new system.

The number of public organizations in the country rose from 286 in 2012 to 332 this year, nearly two-thirds of which have been in the red for years.

Fiscal spending on supporting them has expanded by 40 percent over the past five years, double the rate of increase in the national budget.

Many taxpayers share the view that the performance-based wage system is needed to improve productivity of public institutions and enhance the quality of services provided by them.

The rigid and inefficient operation of public organizations will also hamper the country from adapting to the new industrial revolution, economists say.

Moon has suggested replacing the performance-based system with differential payment in accordance to the function, skill and responsibility of each job.

But some experts view his idea as ineffective and unpractical.

It may be impractical and unreasonable to discard a simple system of payment based on achievement to work on a complex scheme hard to be implemented.

“Moon’s suggestion would only make it harder to let an effective practice of wage payment take root in the public sector,” said Cho.