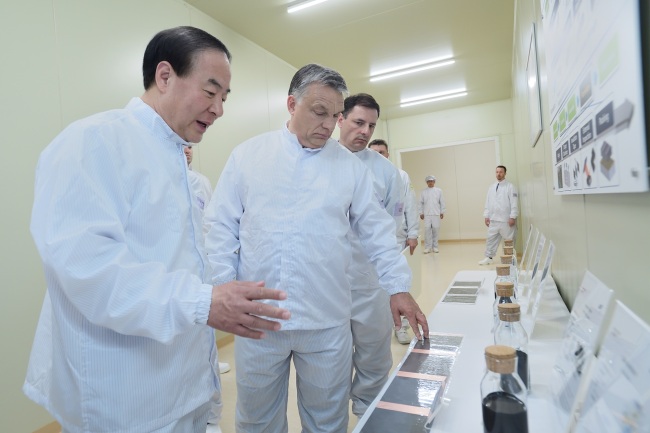 The new plant is a former production line for plasma display panels, of which Samsung renovated as part of its shift in business strategy. The battery maker plans to use the battery-making plant in Hungary as a base to cater to growing demand for EVs, and produce a synergy effect with its plants in Xian, China, and Ulsan in Korea.

Europe has been leading the global EV market, with governments there encouraging the use of environmentally friendly vehicles to curb greenhouse gas emissions. The market for EV batteries has also been growing quickly, the company said.

Located in Goed, 30 kilometers north of Budapest, the plant is set to start operation in second quarter of 2018. The 330,000-square-meter factory is capable of producing batteries for 50,000 EV units a year. The new plant will save logistics cost for Samsung and also to improve its customer service in Europe, the company said.

At the ceremony held on Monday, Hungarian Prime Minister Viktor Orban thanked Samsung for investing in Goed and said that the eastern European country has learned that South Korean companies and their brands produce high quality products. The city of Goed wanted Samsung to work with and that the Hungarian government is supportive of Samsung’s business in the city, he added.

The new plant will produce batteries, high in power and efficiency, equipped with the latest technology by Samsung SDI, said Jun Young-hyun, the head of the company.

“For the first time, state-of-the-art technology of Samsung SDI will be applied to batteries to be made in this plant in Hungary,” he said. “Batteries are one of the most important parts supplied to global car makers. I expect the plant to contribute much to the growth of the European electric vehicle market.”