The RIFs mark the first pension funds in South Korea that allow retirees to withdraw money from the funds. The four types of pension schemes by the asset management arm under Korea’s largest conglomerate were based on the US financial services firm’s diversified investment portfolio. 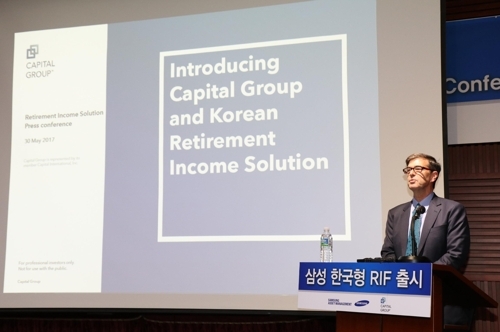 (Samsung Asset Management)
Income fund subscribers will be able to secure adequate ending wealth with the investment portfolio, where the manager purchases some 650 stocks and bonds from 70 countries. Under a set of simulations, 99 subscribers of the 300 million won ($266,900) pension fund out of 100 could leave 150 million won behind after withdrawing 625,000-1.1 million won per month for 25 years.

Samsung Asset Management estimated the individual retirement pension market in South Korea to grow from 12.4 trillion won as of the end of 2016 to some 40 trillion won by 2020, in the wake of the retirement of baby boomers -- born between 1955 and 1974 -- who account for some 30 percent of the entire population.