President Moon Jae-in's policy advisory panel on Saturday reaffirmed his stance that police must enhance its protection of human rights before they are given more power in an effort to better keep the prosecution in check.

Concerns have lingered over Moon's election pledge to give more investigation authority to police with critics pointing to their history of allegedly excessive crackdowns on street protesters, some of which resulted in fatalities. 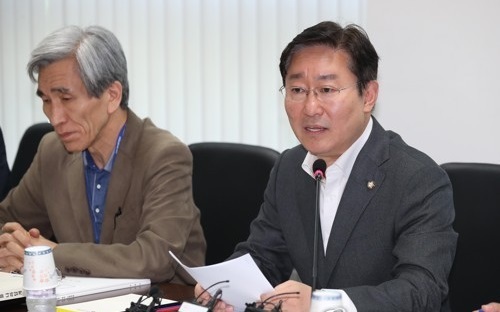 Park Beom-kye, a senior member of the State Affairs Planning Advisory Committee, speaks during the National Police Agency`s policy briefing, at its office in Seoul on May 27, 2017. (Yonhap)
The reaffirmation came during the National Police Agency's policy briefing to the State Affairs Planning Advisory Committee, Moon's de facto power transition team. His government was launched earlier this month without a preparatory period due to the March 10 ouster of his scandal-hit predecessor, Park Geun-hye.

"(The presidential office's argument that) police would have to be reborn as an agency to advocate for human rights should it take more investigation authority ... That makes much sense and is appropriate," Park Beom-kye, the head of the committee's subpanel in charge of political and administrative affairs, said during the briefing.

On the campaign trail, Moon emphasized the need to split up the right to investigate and indict criminal suspects, which is currently monopolized by the prosecution.