Preparing for North Korea's growing threat, the Pentagon will try to shoot down an intercontinental-range missile for the first time in a test next week. The goal is to more closely simulate a North Korean ICBM aimed at the US homeland, officials said Friday.

The American interceptor has a spotty track record, succeeding in nine of 17 attempts against missiles of less-than-intercontinental range since 1999. The most recent test, in June 2014, was a success, but that followed three straight failures. The system has evolved from the multibillion-dollar effort triggered by President Ronald Reagan's 1983 push for a "Star Wars" solution to ballistic missile threats during the Cold War -- when the Soviet Union was the only major worry.

North Korea is now the focus of US efforts because its leader, Kim Jong-un, has vowed to field a nuclear-armed missile capable of reaching American territory. He has yet to test an intercontinental ballistic missile, or ICBM, but Pentagon officials believe he is speeding in that direction. 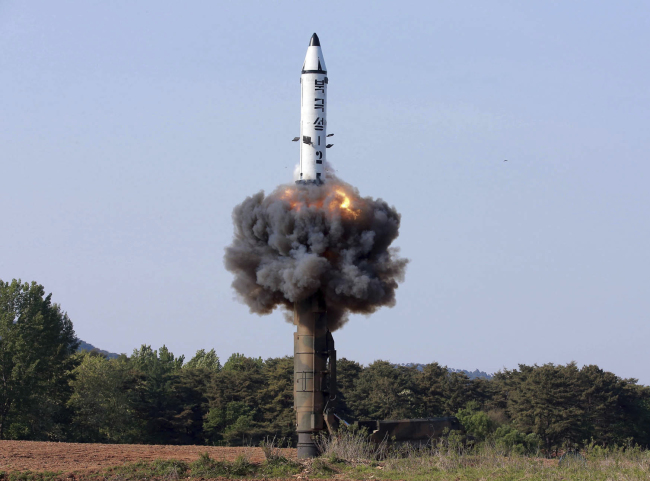 In this undated photo released on May 22 by North Korea`s official Korean Central News Agency, the Pukguksong-2 missile lifts off during a test a day earlier. (AP-Yonhap)
The Pentagon has a variety of missile defense systems, but the one designed with a potential North Korean ICBM in mind is perhaps the most technologically challenging. Critics say it also is the least reliable.

The basic defensive idea is to fire a rocket into space upon warning of a hostile missile launch. The rocket releases a 5-foot-long device called a "kill vehicle" that uses internal guidance systems to steer into the path of the oncoming missile's warhead, destroying it by force of impact. Officially known as the Ground-based Midcourse Defense system, the Pentagon likens it to hitting a bullet with a bullet.

The Pentagon's Missile Defense Agency, which is responsible for developing and testing the system, has scheduled the intercept test for Tuesday.

An interceptor is to be launched from an underground silo at Vandenberg Air Force Base in California and soar toward the target, which will be fired from a test range on Kwajalein Atoll in the Pacific. If all goes as planned, the "kill vehicle" will slam into the ICBM-like target's mock warhead high over the Pacific Ocean.

The target will be a custom-made missile meant to simulate an ICBM, meaning it will fly faster than missiles used in previous intercept tests, according to Christopher Johnson, spokesman for the Missile Defense Agency. The target is not a mock-up of an actual North Korean ICBM.

"We conduct increasingly complex test scenarios as the program matures and advances," Johnson said Friday. "Testing against an ICBM-type threat is the next step in that process."

Officials say this is not a make-or-break test.

While it wasn't scheduled with the expectation of an imminent North Korean missile threat, the military will closely watch whether it shows progress toward the stated goal of being able to reliably shoot down a small number of ICBMs targeting the United States. The Pentagon is thirsting for a success story amid growing fears about North Korea's escalating capability.

"I can't imagine what they're going to say if it fails," said Philip Coyle, senior science fellow at the Center for Arms Control and Non-Proliferation. He headed the Pentagon's office of operational test and evaluation from 1994 to 2001 and has closely studied the missile defense system.

"These tests are scripted for success, and what's been astonishing to me is that so many of them have failed," Coyle said.

The interceptor system has been in place since 2004, but it has never been used in combat or fully tested. There currently are 32 interceptors in silos at Fort Greely in Alaska and four at Vandenberg, north of Los Angeles. The Pentagon says it will have eight more, for a total of 44, by the end of this year.

In its 2018 budget presented to Congress this week, the Pentagon proposed spending $7.9 billion on missile defense, including $1.5 billion for the ground-based midcourse defense program. Other elements of that effort include the Patriot designed to shoot down short-range ballistic missiles and the Terminal High-Altitude Area Defense, or THAAD, which the US has installed in South Korea as defense against medium-range North Korean missiles.

The Trump administration has yet to announce its intentions on missile defense.

President Donald Trump recently ordered the Pentagon to undertake a ballistic missile defense review. Some experts argue the current strategy for shooting down ICBM-range missiles, focused on the silo-based interceptors, is overly expensive and inadequate. They say a more fruitful approach would be to destroy or disable such missiles before they can be launched, possibly by cyberattack. (AP)