[ The Korea Herald – Send E-mail ]
[Eye Interview] Inside criminal minds
Legendary profiler tells story of South Korea’s serial killers
By Bak Se-hwan
Published : May 26, 2017 - 16:36
Updated : May 26, 2017 - 16:37
When Jeong Nam-kyu was first arrested for housebreaking and attempted murder in 2006, few imagined that the diminuitive, 37-year-old man would turn out to have been the perpetrator of a string of murders that shook the country for years.

The man, showing no remorse, signs of being intimidated or fear for his own fate, confessed to killing two boys in 2004 and more. His cool-headed confession made investigators shudder.

It was then that criminal profiler Kwon Il-yong was brought in. 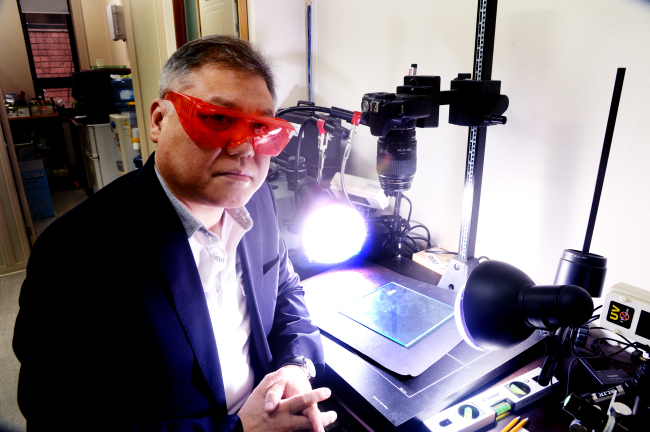 Former criminal profiler Kwon Il-yong (Park Hyun-koo/The Korea Herald)
Through a series of interviews with the suspect, Kwon managed to help resolve the case, analyzing Jeong’s motives and obtaining full confessions to the killings of 13 people from January 2004 to April 2006.

“It was the case that I would never forget for my entire life,” recalled Kwon, now retired and enjoying life away from the world of crime.

Jeong was sentenced to death in 2007 – the death penalty remains on the books in South Korea, but no executions have actually been carried out since 1997 . Two years later, he hung himself in jail, with a noose that he made from plastic dust bags. Before his death, he is said to have remarked,

“It’s easy to quit smoking, but not killing.”

“Pure evil itself -- I saw it in him,” Kwon said during an interview with The Korea Herald on Tuesday.

Kwon started off his 28-year career with police, as a patrol cop. He was selected to become the nation’s first criminal profiler 17 years ago and had since been part of the investigation into almost every major crime.

He has interviewed over 1,000 criminals, including Yoo Young-cheol, a serial killer and self-confessed cannibal who murdered 20 people, and Kang Ho-sun, who murdered eight women and killed his wife and mother-in-law by arson. He also pioneered the police’s behavioral science-based investigation. Before his retirement in April, he was the head of Criminal Behavior Analysis Team at the National Police Agency.

In person, Kwon, 53, was a cordial man, with a disarming smile and observing eyes. When he spoke of work, the intensity and focus was a reminder of his trailblazing path in South Korea’s approach to criminal investigations.

“The way I view heinous crimes is that they are mostly related to antisocial personalities who perceive things or circumstances very differently than others. The personality disorder can be attributed to one’s genes, childhood traumas or the environment in which he or she grew up,” he said. “The combination of all these turns a person into a monster, with no respect for others.”

As society changes, so does crime. In South Korea, a break-neck economic development and social changes has had its impact on crime patterns and motivations, Kwon explained.

“Before the early 1990s, criminal motivations were pretty clear, with no need for investigators to adopt such modern investigation techniques such as criminal profiling. Most criminal activities at that time had something to do with poverty, personal revenge or love affairs, and could be explained as easily as they seemed on the surface.”

Killers who randomly selected their victims began to emerge noticeably in the 1990s, when social and political changes beset the country following democratization and the advent of global free trade.

One of the most notable cases was that of the “Jijon clique,” created in 1993 with the specific intention to kill.

Seven members of the gang, all in their 20s, shared their grudge against the well-off, kidnapped victims and took them to the cellar of their rustic hide-outs. There, they murdered, dismembered victims’ bodies and ate their flesh. Five people -- all ordinary citizens not super-rich-- lost their lives at their hands.

“This hate crime, which mostly targeted women and the weak, is an example that shows a growing sense of deprivation and alienation among underprivileged people of that time,” said Kwon.

Crimes of today are increasingly driven by “rage and anger” caused by social inequality, he noted.

“Feeling deprived of opportunities to take roles in the society, people committed horrendous acts of violence against others whom they had no ties with, simply to feel superior to them and show their anger towards society. They believe that their actions were justified. These are certainly not a common type of crime you could see a few decades ago,” said Kwon.
He said he also grew up in a poor family, but the major difference between himself and such criminals was that “I’d never considered myself as being isolated from friends, colleagues and society.”

“Criminals tend to believe they are deprived of the opportunities (to be part of society).”

Kwon acknowledged that he had battled with post-traumatic stress in the course of his work with brutal criminals.

“Memories linger on for quite some time,” he said.

He was also not free from fear. He recalled the shock he felt when he learnt that a photo of him was found at the home of a suspect.

To avoid letting work affect his upbeat personality, Kwon made it a rule to have an after-party after closing a case at a nearby pub, simply to talk.

“It could be an unbearable burden if we (policemen) have to endure such mental pain all alone. We gather together often, just to exchange idle chitchat sometimes,” he said.

Having grown up in a Catholic family, faith also helped him to get through the day, without letting the work obscure who he really was, quoting Friedrich Nietzsche’s admonishment that those who fight monsters risk becoming monsters themselves.

But despite being a Catholic, Kwon said he supports capital punishment.

“It seems to me that our judicial system is better than some people worry with regard to the possibility of executing falsely-charged, innocent citizens. I also believe that the statute of limitations should be abolished for serious crimes,” he said.

“Or we could also consider allowing judges to give imprisonment for life without the possibility of parole, like they do in the United States, to curb crimes.”