[ The Korea Herald – Send E-mail ]
Kospi carries on record run on world rally
By Son Ji-hyoung
Published : May 25, 2017 - 16:19
Updated : May 25, 2017 - 16:19
The benchmark index of South Korea‘s main bourse continued its run into an unprecedented high for the fourth straight trading day Thursday, riding on the US market rallies after the release of the US Federal Reserve’s meeting minutes. 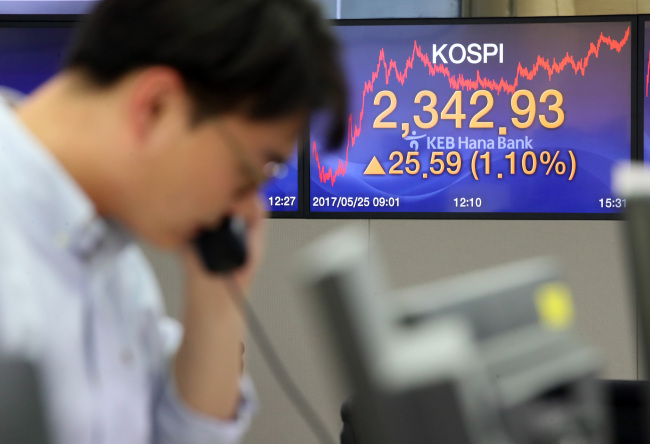 The bull ride took a cue from Wall Street gains Wednesday on favorable market reactions to the Fed‘s sign of raising the interest rates soon.

Local reports, however, pointed to a dwindling trade volume of individual investors in the local stock markets and subsequent over-reliance on offshore and institutional investors. Individuals traded 2.19 trillion won worth of shares per day this year, down from 2.25 trillion won in 2016 and 2.89 trillion won in 2015, according to data from the Korea Exchange.

Local currency strengthened against the greenback. The Won was traded at 1,116.6 won against the dollar, up 6.4 won, or 0.57 percent from the previous day at around 3:30 p.m. Thursday.