Seeking to promote basic human rights, Moon will directly receive regular reports from the National Human Rights Commission of Korea. He may also evaluate government agencies on how well they accommodate the watchdog’s advice.

“Underlining that the new government was created by the power of civil revolution, President Moon Jae-in made it clear (that he wanted) to break away from the previous government’s practices of disregarding human rights, and correct wrongdoings,” Cho Kuk, senior presidential secretary for civil affairs, said in a briefing. 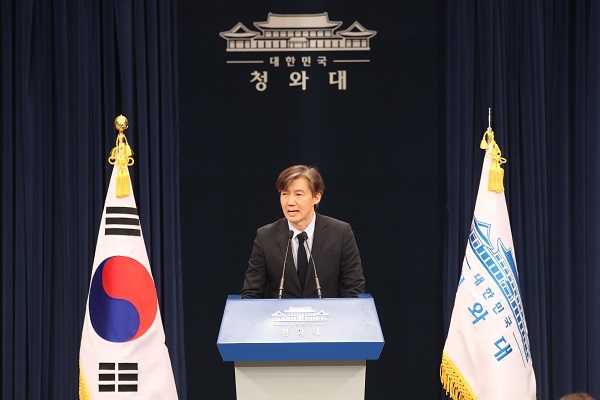 Cho Kuk, senior presidential secretary for civil affairs, speaks during a press briefing on human rights issues held at the presidential office Cheong Wa Dae in Seoul on May 25, 2017. (Yonhap)
The president ordered the NHRC chairman to make direct reports on a regular basis, an action which had largely been discarded under the two former conservative administrations, according to Cho.

Moon also called on the nation’s police organization to come up with plans to promote human rights during investigations, making it a precondition for the expansion of investigative authority -- a goal which the police has been striving to achieve.

“Statistics show that the police and detention facilities account for a large part of (human rights) violations,” said Cho, who was formerly a professor of criminal law.

“I understand that the police are longing to have the range of their investigative authority readjusted. I demand that the police, as a precondition for such goals, first come up with a detailed and plausible plan to promote human rights.”

The president’s determination to abolish human rights infringement is largely attributed to his background as a human rights lawyer, Cho added.

Responding to concerns that the NHRC recommendations lack a binding effect, Cho explained that Moon would do his best within his given power to encourage government agencies to follow its advice.

“It is up to the National Assembly to bestow a binding effect upon the NHRC recommendations,” Cho said.

The president, as chief of the administration, will focus on elevating the status of the watchdog by pushing government bodies to earnestly abide by its recommendations and publicly meeting with the NHRC chairman, he explained.

Since its establishment in 2001, the NHRC has played a leading role by voicing its opinion over key human rights issues, ranging from the conscientious objection to military service, abolishment of the capital sentence and the disputed National Security Act.

It even clashed head-on with the government in 2003 against the then-Roh Moo-hyun administration’s decision to dispatch troops to Iraq in support of the US Army.

But under former conservative Presidents Lee Myung-bak and Park Geun-hye, the watchdog repeatedly came under fire for lack of leverage and its dubious process of personnel appointments.

Former President Lee even attempted to turn the independent watchdog into a presidential organization, a move seen as a serious infringement of its independence and transparency.