[ The Korea Herald – Send E-mail ]
Finance Ministry poised to propose W10tr supplementary budget next month
By Korea Herald
Published : May 24, 2017 - 16:01
Updated : May 24, 2017 - 18:38
The Finance Ministry said Wednesday that the government will release a road map by the end of June on how to create jobs in the public sector, alluding to a 10 trillion won ($8.89 billion) supplementary budget proposal by President Moon Jae-in.

In a report to the State Affairs Planning Advisory Committee, Moon’s de facto transition team, the ministry said that the government would speed up the preparation for the extra budget plan to be presented to the National Assembly by next month. 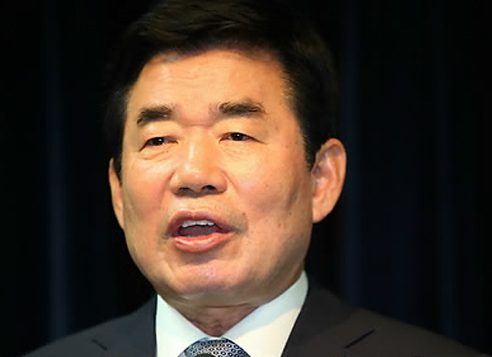 Kim Jin-pyo (Yonhap)
The committee head Kim Jin-pyo also urged the participants to “gather wisdom” for an efficient road map to create jobs. The exact size of the extra budget was not discussed, but Moon had pledged around 10 trillion won for job creation efforts during his campaign.

The 70-day advisory committee was launched by the Moon administration earlier this month with the task of drawing up a five-year economic blueprint for the new administration, ranging from budget management to unemployment.

Kim also revealed his five-year state management plan will stress job creation as one of its top priorities.

“Economic growth has changed with (Korea experiencing) low growth and no employment growth,” Kim said. “From now on, the new government will put job creation at the forefront of all policies.”

The committee head cited the need to improve job growth policies such as the joint growth of large enterprises and SMEs, increased support for venture startups, as well as further fostering “fourth industrial revolution” developments and the software and service industries.

“It will take a lot of time to change the structure of unemployment and fix the economic structure in order to change the current condition of our economy, but the government cannot just sit and do nothing,” he said, adding that the new government must put high priority on establishing economic and social policies that promote the creation of “better quality jobs.”

The de facto transition committee also plans to simplify Moon’s 201 campaign pledges down to 100 policy goals, with the management blueprint to be completed in its entirety and reported to the president by early July.

Cheong Wa Dae officials also announced Wednesday that they had installed a new electric bulletin board that displays brief summaries of Korea’s current employment market conditions in an effort to further highlight the Moon administration’s efforts to increase the number of jobs in the country.

The board features two panels displaying 18 employment-related key indicators including the youth jobless rate and changes in the number of overall jobs.