South Korea's central bank is tipped to hold its benchmark interest rate steady for May amid expectations of a possible US rate hike and a recovery in the local economy, a poll showed Tuesday.

The survey of 200 bond market experts showed that all of the respondents forecast the Bank of Korea to freeze the key rate at its monthly rate-setting meeting slated for Thursday. The survey was taken by the Korea Financial Investment Association from May 10-15. 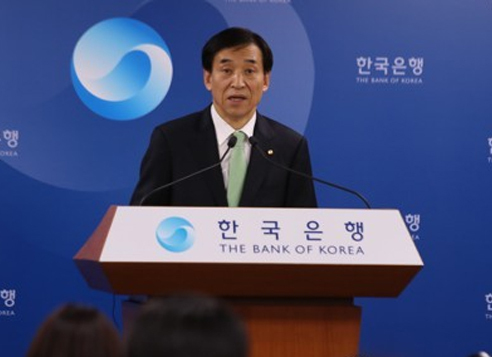 Bank of Korea Gov. Lee Ju-yeol speaks during a press conference at the central bank building in Seoul on April 13, 2017, after a monthly policy meeting. (Yonhap)
The BOK left its policy rate unchanged at an all-time low of 1.25 percent for the 10th consecutive month in April to bolster the economy struggling with anemic consumer spending.

According to the findings, the analysts believe that the need for a rate cut has eased due to the high possibility of another US rate increase and growing hopes that South Korea's new government may expand fiscal spending to help revive Asia's fourth-largest economy.

In March, the US Federal Reserve raised its key rate by a quarter of a percentage point to a target range of 0.75 to 1 percent. It also signaled that additional hikes would be made in a gradual manner later this year.

A day after a snap presidential election, Moon Jae-in of the liberal Democratic Party of Korea was sworn in as South Korea's new president on May 10, vowing to invigorate the still-sputtering economy.

The survey also showed the respondents thinking that the South Korean economy is still faced with such adverse factors as a continued drive to restructure troubled industries and a sustained slowdown in economic growth stemming from weak private consumption.

Some 70 percent of experts expect the domestic stock market to remain almost flat this month while also forecasting bond rates to go up due to a potential US rate raise in June and worries over the government's issuance of additional state bonds to help stimulate the economy, according to the poll. (Yonhap)