More than 10 percent of full-time workers in South Korea consider themselves as nonregular employees because of poor working conditions, a report said Monday.

According to the report by the Korea Labor Institute, 10.7 percent of South Korea's regular workers believe they are temporary employees owing to long work hours and low pay. 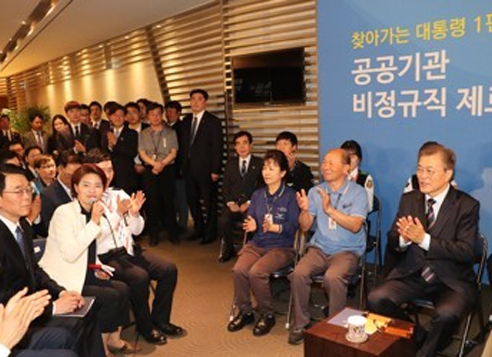 President Moon Jae-in (right) claps during a meeting with employees of Incheon International Airport Corp. on May 12, 2017. Moon pledged to turn all temporary jobs in the public sector into regular, full-time ones while in office. (Yonhap)
Kim Ki-hong, a researcher at the think tank, authored the report based on the 2014 annual survey of 5,000 households on their economic activity, job mobility, income and consumption.

In contrast, 18.7 percent of the surveyed temporary workers think they are regular employees thanks to relatively good working conditions. Their workweek reached 46.5 hours on average, with their average monthly wages coming to 2.38 million won.

"The difference in workers' perceptions of their status stems from the gaps in average working hours and monthly pay," the researcher said.

On top of the workweek and pay, workers who consider themselves as temps suffered worse conditions in terms of insurance coverage and severance pay, according to the report.

South Korea's new President Moon Jae-in has pledged to remove all nonregular jobs in the public sector during his five-year term as part of his signature job creation campaign.

According to the latest government tally, temporary workers accounted for 32 percent of all employees in the country as of the end of March 2016. (Yonhap)