Demands are rising among apartment residents to set up solar panels in their complexes since the government started to offer more subsidies for the installation costs last year.

The Seoul Metropolitan City Government said Friday that 3,793 apartment units finished installing solar panels during the first four months of this year, compared with 846 in the same period last year.

“Compared with last year, more people are making inquiries about the incentives for installing solar panels at their apartment units,” a Seoul City government official told The Korea Herald.

The capital has the largest budget set aside to subsidize residential solar system installation compared to other areas, with some 5 billion won of budget fixed for this year, including the 1.7 billion won of subsidies coming from the central government. 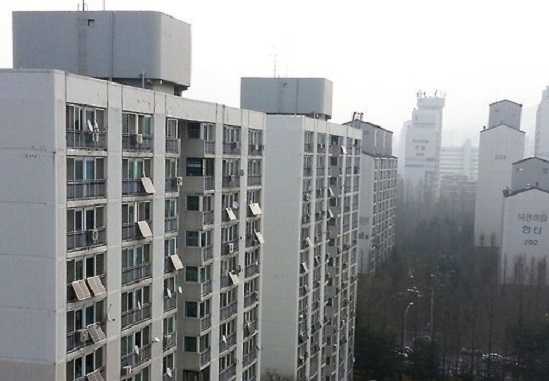 (Yonhap)
Starting in October 2016, the Ministry of Trade, Industry and Energy began, preliminarily, to offer apartment resident subsidies through local governments to finance up to 25 percent of the whole cost needed for installation.

Out of the ministry’s 40.7 billion won-large budget related to measures concerning residential solar power systems, 4 billion won ($3.5 million) has been set aside specifically for apartment units. Of the 4 billion won, the largest portion goes to Seoul.

The ministry has aimed to start supporting installations of some 20,000 apartment units by the year’s end and so far has approved the support for 18,000 units nationwide as of April, it said. The target is expected to be well achieved, it added.

The ministry also decided to expand the subsidies doled out for non-apartment residents that wish to set up solar panels at home up to 50 percent of the cost spent installing the system.

With the increasing demands, the budget is also fast dissolving. In addition, this year’s residential solar power system-related budget has been cut by 1.3 billion won from last year’s 42 billion won.

“The ministry is looking for ways to supplement the budget,” the official said.

Meanwhile, the Ministry of Strategy and Finance on Friday revised the budget guidelines for next year to reflect the main policies of Korea’s newly elected President Moon Jae-in. The president’s policies on renewable energies are expected to be high on the agenda, according to the ministry.

During his presidential campaign, Moon pledged that he would try to increase the portion of renewable energy in total electric generation from the current 1.1 percent to 20 percent by 2030.

If the 20 percent target is achieved, the market size of domestic solar energy industry is also forecast to rise, as the government pushes ahead expanding the infrastructure to increase solar-generation capacity, according to industry sources.