The movie starring Seol Kyung-goo and Im Si-wan sold 95,261 tickets Wednesday, according to the computerized tally from the Korean Film Council. 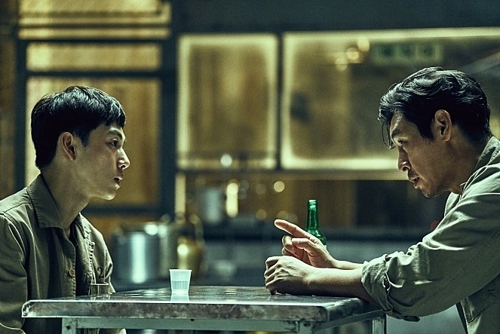 (Yonhap)
"The Merciless" is about the friendship and betrayal between Jae-ho, played by Seol, plotting to become the leader of an organized crime ring after being released from prison, and the organization's fearless and ebullient newcomer Hyeon-su, portrayed by Im. The two meet behind bars and work together after their release.

Directed by Byun Sung-hyun, the film was chosen for screening in the noncompetition Midnight Screening section of the 70th Cannes Film Festival that runs from May 17-28.

The American thriller "Get Out," directed by Jordan Peele, came in second, amassing 92,121 viewers and was trailed by "King Arthur: Legend of the Sword," which sold 31,066 tickets.

The South Korean comedy "The Sheriff" and Ridley Scott's space horror film "Alien: Covenant" came in fourth and fifth, respectively, followed by "Guardians of the Galaxy Vol. 2" and "The Boss Baby." (Yonhap)