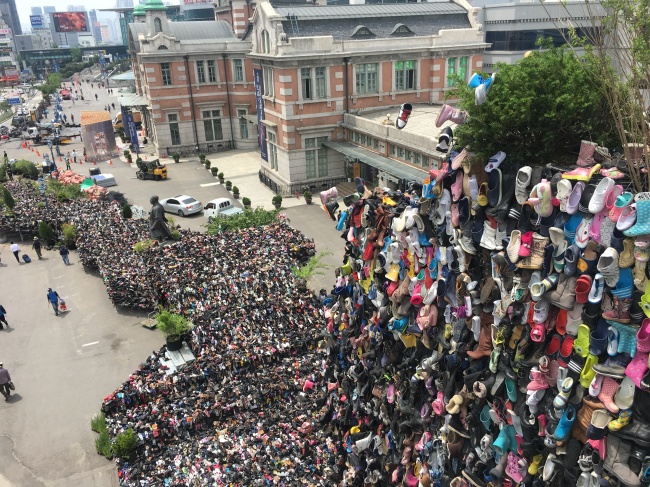 (Kim Da-sol/The Korea Herald)
Shoes Tree, a major art piece installed at the center of Seoullo 7017, was designed and installed by environmental artist Hwang Ji-hae. Flower seeds have been planted inside each shoe.

“We invited Hwang to install Shoes Tree to give a meaning of urban restoration to visitors of Seoullo 7017,” said Choi Kwang-bin, the Seoul Metropolitan Government’s city gardening department.

“Both Shoes Tree and Seoullo 7017 are given new life with new meaning, reborn as a creative upcycling art and a unique park, respectively.”

The reason Hwang used shoes to create a tree was to remember the historical significance of the Yeomcheon-gyo handmade shoes street, located behind Seoullo 7017, the artist was quoted as saying. 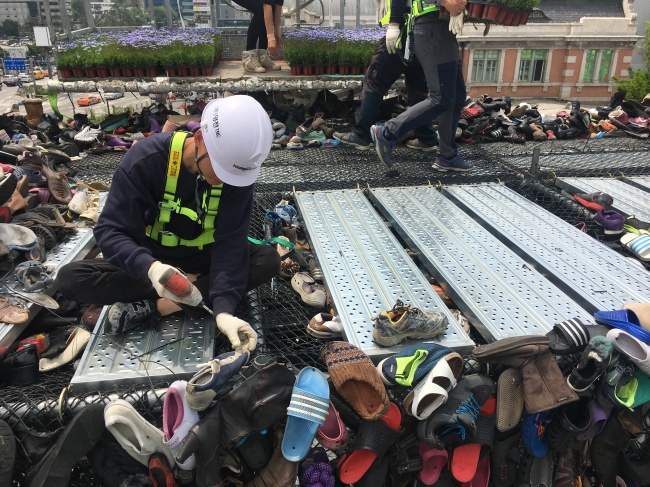 Workers hang worn-out shoes on Shoes Tree on Seoullo 7017, Seoul’s soon-to-open pedestrian-friendly park, near Seoul Station on Tuesday. (Kim Da-sol/The Korea Herald)
The city restoration project of Seoullo 7017 began four years ago to make use of an old overpass that once served as a major road connecting western and central Seoul. Public calls for its removal had mounted after a safety assessment classified the outdated overpass as dangerous in 2006.

The “70” in the name Seoullo 7017 refers to 1970, when the Seoul Station flyover was constructed, while 17 is a reference to the number of walkways connected to it and 2017, when its construction was completed. 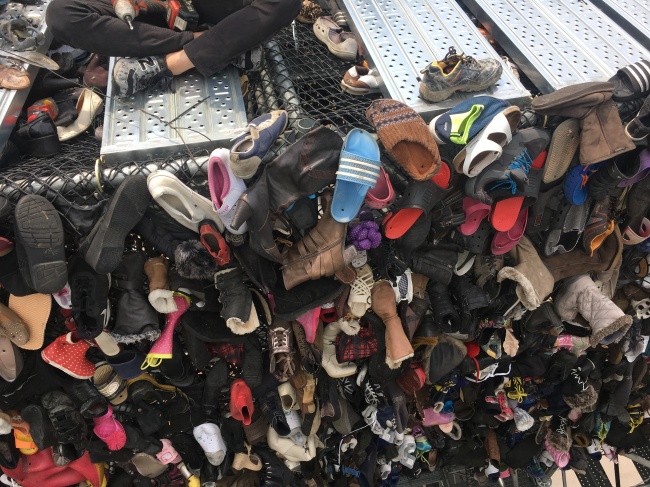 Workers hang worn-out shoes on Shoes Tree on Seoullo 7017, Seoul’s soon-to-open pedestrian-friendly park, near Seoul Station on Tuesday. (Kim Da-sol/The Korea Herald)
Shoes Tree will be exhibited from the official opening of Seoullo 7017, slated for Saturday, until May 29.

Citizens can participate on the opening day by bringing their own shoes, drawing flowers and hanging them on Shoes Tree.

A variety of events involving citizen participation will take place at Seoullo 7017 and continue until June 18, the city said.