A White House official handling Korea affairs arrived in Seoul Monday for a two-day visit to prepare for a summit between the leaders of South Korea and the United States. 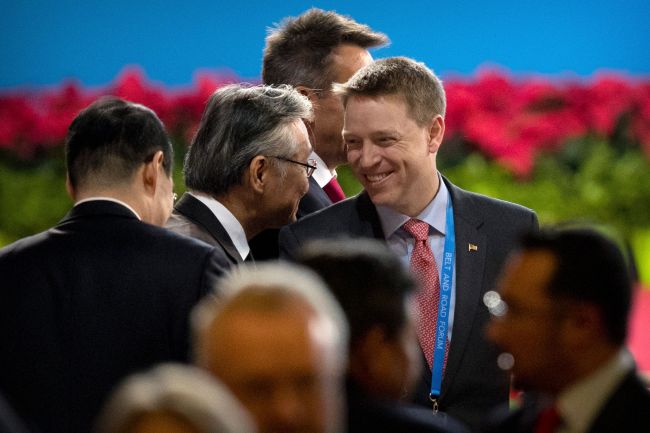 Matt Pottinger, Special Assistant to US President Donald Trump and National Security Council (NSC) Senior Director for East Asia (R) arrives for the opening ceremony of the Belt and Road Forum at the China National Convention Center (CNCC) in Beijing, Sunday. (AFP)
"I am also here to express my congratulations to the Korean people for another successful democratic transition of power which is wonderful thing. South Korea really is an inspiration to the region and in the world," Pottinger told Yonhap News Agency upon arrival in the evening.

"We will be following up on the very good conversation that President Trump had with President Moon last week and hopefully we will have more to talk about after that," he added.

He is the first high-ranking White House official to travel to South Korea after Moon was sworn in last Wednesday.

Allison Hooker, director for Korea at the NSC, is also set to arrive in Seoul on the day.

The U.S. officials are expected to meet with senior South Korean officials from the presidential office Cheong Wa Dae and the foreign ministry to apparently discuss the timetable and other necessary issues related to summit talks that Moon and Trump are seeking to hold.

A foreign ministry source said that Chung Eui-yong, a former South Korean ambassador to Geneva, who currently leads Moon's security and diplomatic task force, and Deputy Foreign Minister Lee Jeong-kyu are among those the U.S. officials will meet during their stay.

It remains unclear whether they will pay a courtesy call to President Moon, he added.

Observers say that the summit will likely take place as early as June. Some expect their first talks could be delayed until the Group of 20 summit to be held in Germany on July 7-8 or even after.

The leaders will likely discuss cooperation on North Korea's evolving nuclear and missile threats. Also high on the agenda could be the deployment of the THAAD missile defense system in South Korea, which was decided and carried out by the administration of Moon's predecessor.

The White House delegation's trip to Seoul, meanwhile, comes amid heightened tensions after the North carried out a ballistic missile test on Sunday, Pyongyang's first provocation since Moon's inauguration.

Moon condemned North Korea for the latest missile launch, calling it a grave threat to regional security and a clear violation of the U.N. Security Council resolutions.(Yonhap)