Russian President Vladimir Putin said Monday that North Korea's latest missile test was "dangerous", but he warned that Pyongyang was being intimidated and called for a peaceful solution to regional tensions.

"We are categorically against the expansion of the club of nuclear powers," Putin told reporters after an international forum in Beijing. 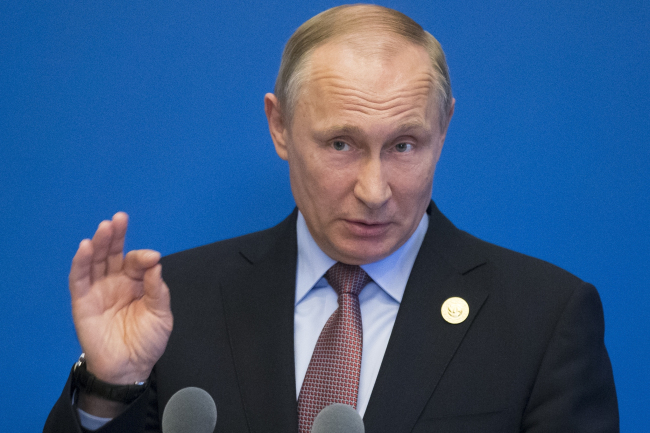 Russian President Vladimir Putin gestures while speaking to the media after the Belt and Road Forum at the China National Convention Center at the Yanqi Lake venue outskirt of Beijing in China, Monday. (AP)
But, he added: "We must stop intimidating North Korea and find a peaceful solution to this problem."

North Korea celebrated Sunday's launch of what appeared to be its longest-range ballistic missile yet tested in a bid to bring the US mainland within reach, saying it was capable of carrying a "heavy nuclear warhead".

The missile was launched on an unusually high trajectory, with KCNA saying it flew to an altitude of 2,111.5 kilometres and travelled 787 kilometres before coming down in the Sea of Japan (East Sea).

That suggests a range of 4,500 kilometres (2,800 miles) or more if flown for maximum distance, analysts said.

The White House said Sunday that the missile came down "so close to Russian soil... the president (Donald Trump) cannot imagine that Russia is pleased."

But Russia's defence ministry later said the missile landed about 500 kilometres from its territory and posed no threat. (AFP)