Chinese President Xi Jinping stressed the importance of improving South Korea-China relations during his meeting with a South Korean delegation visiting the country, the South Korean chief of the delegation said Monday.

On the sidelines of the Belt and Road Forum for International Cooperation, the delegation led by Rep. Park Byeong-seug, a veteran politician with close ties to President Moon Jae-in, held a meeting with Xi on Sunday evening, Park told reporters. 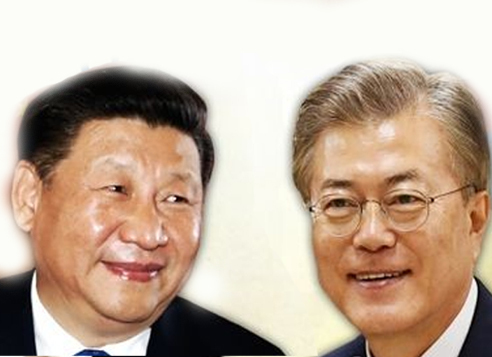 During the 10-minute meeting, Xi expressed hopes for improved relations between the two countries although the deployment issue wasn't discussed there, Park said.

"(Xi) stressed the South Korea-China relationship should be taken very importantly and the development of the bilateral relationship is a very important element of peace in the two countries, Asia and the whole world," Park told reporters.

Referring to Moon's telephone conversation with Xi last week, "Xi said he was very satisfied with the call and he had a lot in common with President Moon," according to Park.

Moon talked to Xi over the phone on Thursday, a day after he officially took office as president, and agreed to shore up bilateral relations marred by the deployment and subsequent economic retaliations by China.

The lawmaker of the ruling Democratic Party said, "I got the deep impression that (Xi) basically trusts President Moon Jae-in ... and he seems to have a different perception of the new (South Korean) government compared with the previous one."

Park said the phone talks between Moon and Xi led to his delegation's unscheduled meeting with the Chinese leader, probably signaling a breakthrough to the stalemate in bilateral relationships.

"It looks like the phone conversation may have triggered a mutual consensus on repairing South Korea-China relations ... there will likely be steps forward from both countries." (Yonhap)