[ The Korea Herald – Send E-mail ]
New NK missile poses test for Moon Jae-in
By Shin Hyon-hee
Published : May 15, 2017 - 16:03
Updated : May 15, 2017 - 17:59
North Korea said Monday it had successfully tested a new type of a mid- and long-range missile capable of carrying a “large, heavy nuclear warhead” a day before, warning it could strike the US mainland.

The Hwasong-12 flew 787 kilometers, reaching an altitude of 2,111.5 kilometers as planned, according to the official Korean Central News Agency. Witnessing the launch, leader Kim Jong-un called it a “great success,” ordering additional development of “highly sophisticated, various nuclear weapons and means of nuclear strike,” it said. 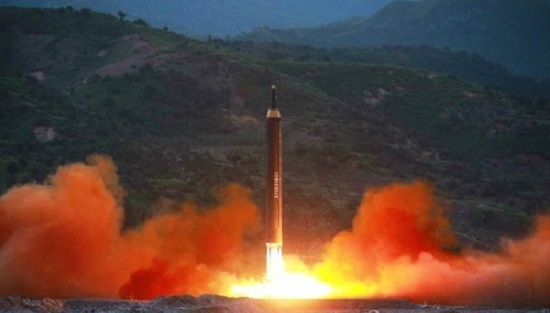 This photo, released by the North's Rodong Sinmun daily on May 15, 2017, shows the launch of the Hwasong-12 missile the previous day. (For Use Only in the Republic of Korea. No Redistribution) (Yonhap)
Sunday’s launch came just four days after President Moon Jae-in was sworn in, putting to an early test his approach to the Kim regime that calls for keeping up pressure while creating the mood for dialogue. The liberal leader has relayed signs of detente and even said during his oath of office Wednesday he would visit Pyongyang “under the right conditions,“ which has triggered concerns about a potential crack in the global sanctions and pressure campaign against Pyongyang.

“North Korea should not make a misjudgment despite the changed environment,” Unification Ministry spokesperson Lee Duk-haeng said at a news briefing.

“Fundamentally, there is a shared view that the North’s nuclear and missile provocations pose a grave threat to peace and stability of the international community, beyond the Korean Peninsula.”

The test highlighted the Kim leadership’s steadfast resolve to continue its nuclear and missile development in defiance of growing international pressure, experts say.

Further complicating Moon’s formula is the communist state’s rapidly advancing missile capabilities which it argues are nearing the mastering of technology for building intercontinental ballistic missiles.

John Schilling, an analyst at the US-Korea Institute at Johns Hopkins University in Washington, said it represents “a level of performance never before seen,” saying the missile may be able to fly some 4,500 kilometers if launched on a maximum trajectory. Yang Moo-jin, a professor at the University of North Korean Studies in Seoul, said the distance could near up to 9,000 kilometers, while Yang Uk, a senior researcher at Korea Defense and Security Forum in Seoul, projected the figure at around 7,000 kilometers.

In its initial assessment, Seoul’s Joint Chiefs of Staff reported that the projectile lifted off from Kusong, North Pyongan Province, in the country’s northwest, and cruised more than 700 kilometers before falling into the East Sea.

The Ministry of National Defense here declined to provide an estimate, saying further analysis is need to verify the technological features claimed by the state media, such as on the engine’s reliability and re-entry functions.

“It appears to have not only demonstrated an intermediate-range ballistic missile that might enable them to reliably strike the US base at Guam, but more importantly, may represent a substantial advance to developing an ICBM,” Schilling wrote on the think tank’s 38 North blog.

“Given speculation over the past months about the possibility of military action by the (US President Donald) Trump administration to prevent Pyongyang from acquiring such weapons, the possible testing of ICBM subsystems in this low-key manner may be a North Korean hedge against the possibility of such action.”

If Pyongyang proves to have secured the capability to tip a nuclear device on an IRBM, Moon’s efforts to defrost cross-border ties would face a hurdle due to the Trump administration’s backlash, said Cheong Seong-chang, a senior fellow at the Sejong Institute.

“The US is likely to demand South Korea and China join far stronger sanctions, which would further deepen the North’s international isolation and spell trouble for the Moon administration’s initiatives including a restart of the Kaesong industrial park,” he said.

With a group of White House officials visiting here, Seoul and Washington are expected to coordinate their North Korea policies and a summit between Moon and Trump.

The delegation, led by Matt Pottinger, senior director for East Asia at the National Security Council, and including Allison Hooker, Korea director at the NSC, arrived late Monday for a two-day stay.

The UN Security Council is also scheduled to gather for a closed-door, emergency meeting Tuesday to discuss its response to North Korea’s provocations.