Under the plans, 10 out of 59 coal-fired plants, located in the Gangwon, South Jeolla, South Chungcheong and South Gyeongsang provinces, will stop operating for a month in June.

The concerned power plants have been in operation for 32 to 44 years. 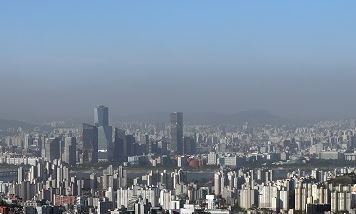 Seoul’s sky shows stark differences in colors as it is blanketed in a layer of fine dust and pollutants Monday. The fine dust level recorded average in Seoul on the day, the National Institute of Environmental Research said. (Yonhap)
The government also plans to shut down the 10 plants for four months next year, from March to June, when power demand is relatively low and fine dust level is high.

“The government will also install dust-measuring devices at some 11,000 elementary to high schools across the nation to constantly monitor air quality,” said President Moon Jae-in during his visit to an elementary school in Seoul on Monday.

Moon added that he would inject some 60 billion won ($53 million) to complete installing those devices as well as air circulators.

During the presidential campaign, Moon has vowed to cut fine dust emissions by 30 percent by reducing the number of coal-fired power plants.

He also pledged to close old nuclear power plants and suspend the construction of new ones in an aim to become a nation without nuclear power in 40 years.

“We can no longer delay the pursuit of safe and clean energies. I will reduce coal-fired power plants and nuclear reactors, but increase renewable natural gas power generation,” Moon said in a statement.

“If construction on a coal-fired power plant is less than 10 percent completed, I will review the project after taking leadership of the country.”

According to government data, the 10 old coal-fired plants account for almost 20 percent of the pollution -- 33,000 tons of dust, sulfur oxide and nitrogen oxide -- discharged from the total number of coal-fired plants operated in the country.