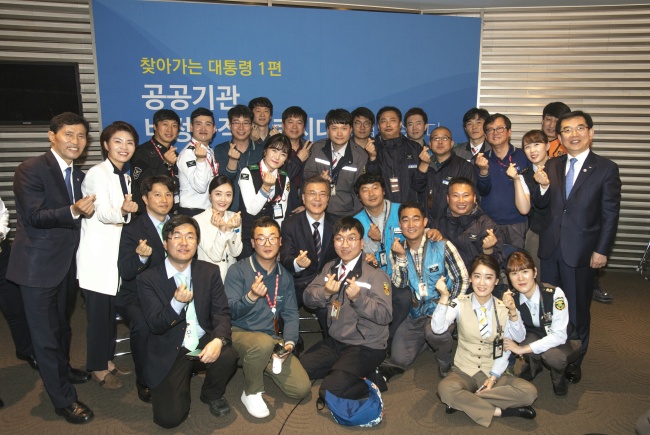 On the back of the president’s visit to the airport last week, the airport’s CEO Chung Il-young held an urgent board meeting Sunday and decided to create a team that would set out to scrap its contract employment system and create permanent positions down the road. Chung himself would lead the team, the company said as it opened the team Monday.


On Friday, Moon told the airport’s contract workers and citizens that he would open an “era of zero irregular jobs in the public sector,” at the airport’s Commercially Important Person Lounge.

Chung, in response, pledged that the airport would cooperate with the government to convert its non-regular positions into permanent ones.

The airport directly employs 1,400 people and some 6,800 contract workers. The number of contract and subcontract workers is expected to increase to around a combined 10,000 later this year due to the opening of its second terminal.

The airport operator’s chief is committed to making all positions regular by the end of this year, according to the company.

The airport operator also said it would aim to offer some 50,000 new positions by 2025 as it starts to work on a fourth runway and develop maintenance, repair and overhaul facilities around the airport site.

The airport’s task force team will go through preparation processes until mid-August and start taking action on its non-regular positions on Aug. 18, aiming to finish converting all positions into regular ones by the end of this year through the due process including legal reviews, it said.