The latest from Ridley Scott sold 524,613 tickets during the May 12-14 weekend, taking the throne on the weekend box office chart according to the computerized tally from the Korean Film Council. 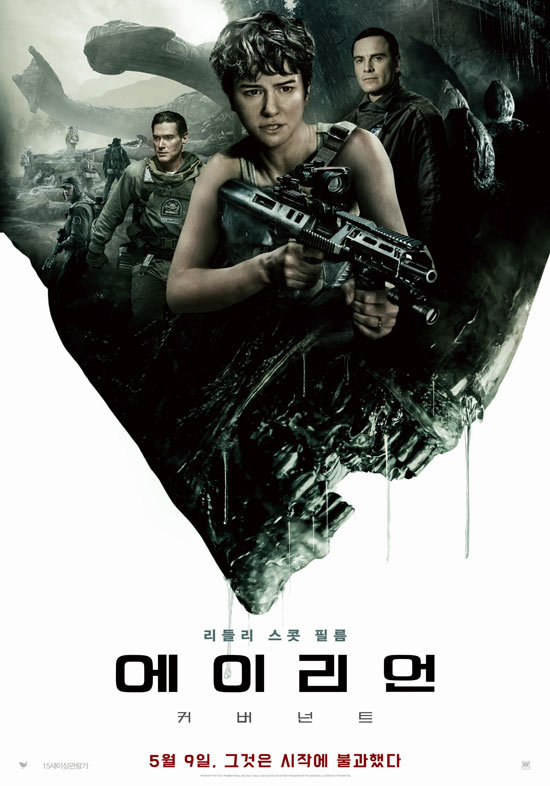 (20th Century Fox Korea)
Released on Tuesday, the sixth in the Alien series has amassed 959,462 viewers until Sunday, staying on top of the daily chart for the sixth consecutive day.

Coming in second was the Korean comedy "The Sheriff in Town" that drew 425,466 cinemagoers.

Set in Gijang, a small seaside town near Busan, "The Sheriff" is about things happening to Dae-ho, a former detective and a self-proclaimed sheriff of the town, after he gets suspicious of Jong-jin, a newcomer from Seoul. Directed by Kim Hyung-ju, it stars Lee Sung-min as Dae-ho and Cho Jin-woong as Jong-jin. Released on May 3, the movie has drawn more than 2.2 million viewers until Sunday.

Coming in a close third was DreamWorks' animated comedy "The Boss Baby," which collected 764,664 views. The new Korean thriller "The Tooth and the Nail" ranked fifth after "Guardians 2," with 150,189 in attendance. (Yonhap)