South Korea's search team investigating the Sewol ferry, which was salvaged three years after it sank in the country's worst maritime disaster, said Saturday it has identified the remains of a missing high school student.

The team said the victim's family identified the remains of a female student named Cho Eun-hwa, by reviewing parts of discovered teeth. The remains were found on the fourth deck close to the stern of the ship. 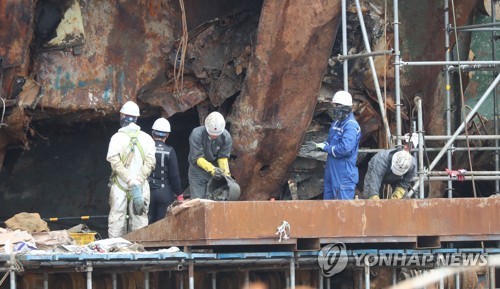 (Yonhap)
According to workers, the remains of another female student might be near where Cho's remains were discovered.

More than 300 people, mostly high school students on a school trip, perished in the 2014 accident.

The ship, which had remained at the bottom of the sea for three years, was placed on land last month following a difficult salvage operation. But the search team had made limited progress in finding and identifying the nine missing passengers.

On Friday, the team found multiple pieces of human bones, marking the first major discovery since it began examining the ship on April 18.

The team still needs to find the remains of eight more victims, including three students. (Yonhap)