“I will not be staying there long. I will come back once I have sorted out my thoughts,” the former South Gyeongsang Province governor said in a press conference before taking off at Incheon Airport.

Hong expressed his firm resolve to rally conservatives again and stop the “pro-North left” from taking control of the nation.

“I had experienced the time when we were the opposition party for a decade, so I will make sure to establish the No. 1 opposition party to watch over the wrongdoings of this (liberal) administration,” he said. 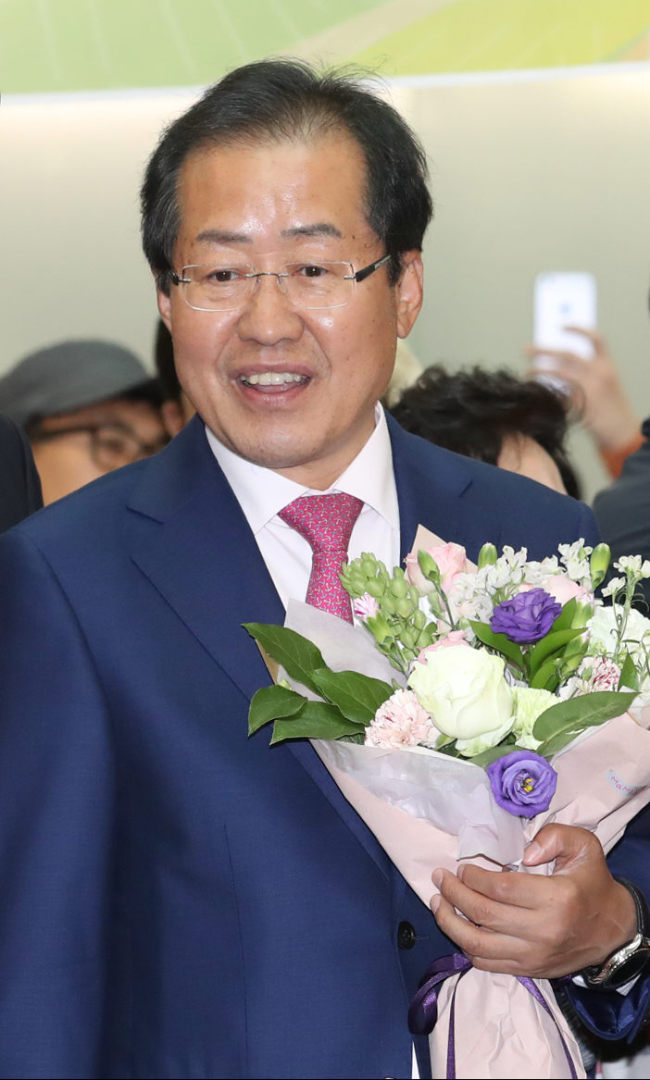 Hong Joon-pyo, the former presidential candidate of the conservative Liberty Korea Party, departs Friday for a monthlong leave to visit his son in the US. Hong finished second in Tuesday’s presidential election, winning 24 percent of the votes. (Yonhap)
Earlier in the day, the former provincial governor wrote a Facebook post expressing gratitude to his supporters and his party members.

“I humbly accept the decision the people have made (in the election). The Liberty Korea Party will do our best to restore the trust of citizens,” the post read. “Let us start anew.”

On Thursday, he had said it was “etiquette” to stand aside when an opponent establishes a new government, while at dinner with his election camp.

He is to stay at the residence of his second son Jeong-hyun, who got married last month and currently resides in the US.

While the exact date of his return is not set, political pundits speculated he would come back within a month or two, before the party’s national convention where they would vote for a new party chief. Hong is likely to be nominated, as he has been credited with having salvaged the party from rock bottom after former President Park Geun-hye’s corruption scandal erupted.

His departure to the United States so soon after the election is not a rare move for candidates who have lost the presidential election in Korea.

Ahn Cheol-soo, a centrist contender who ran in the same race, left for the United States after he gave up his candidacy in the 2012 presidential election.

Running as an independent candidate at the time, Ahn made his departure to the United States on Election Day and stayed there for 82 days.

The former entrepreneur came back to run in a local by-election in April 2013, securing his lawmaker position in Nowon, northeast Seoul.

Late President Kim Dae-jung went to England after losing to Kim Young-sam in his first attempt at the presidency in 1992.