[ The Korea Herald – Send E-mail ]
36 conglomerates to face debt assessment
By Son Ji-hyoung
Published : May 11, 2017 - 16:36
Updated : May 11, 2017 - 16:36
The Financial Supervisory Service announced Thursday that 36 conglomerates will be put under a capital structure assessment by their respective commercial lenders in a pre-emptive move to relieve the financial risks of the groups.

Among them, Woori Bank was the creditor of 13 groups, including Samsung Group, LG Group and CJ Group -- three of five of the largest business groups in Korea. KEB Hana Bank extended loans to five groups, two of which are Hyundai Motor and SK Group.

The data also showed the number of large business groups in South Korea decreased from 39 the previous year. 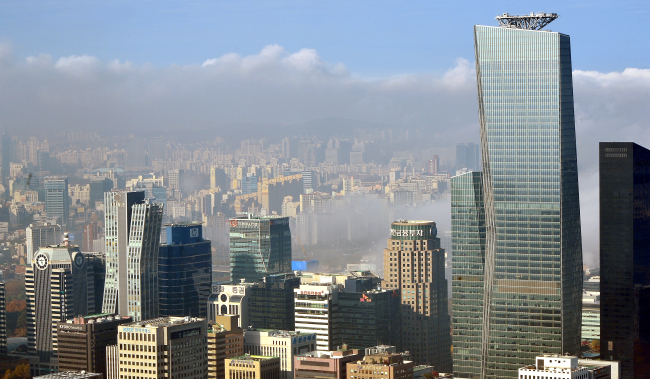 (Herald DB)
Four business groups were not included in the list this year. STX Offshore & Shipbuilding and Hyundai Group were removed from the list because of their changes in corporate structure rather than debt relief. Hansol Group and Taeyoung Group managed to reduce their balance sheets. Sungwoo Hightech was added on the list this year.

The move is aimed to induce a conglomerate to a “pursue sounder balance sheet,” said Cho Sung-min from the financial regulator.

The annual move is the FSS’ pre-emptive measure to relieve the debt of a business group with liabilities over 0.075 percent of the entire credit from financial lenders, which amounted to some 1.45 trillion won ($1.28 billion) in 2017, Cho added.

Lenders will assess the capital structures of business groups with liabilities over 1.45 trillion won starting late May and selected debt-ridden affiliates in June. Based on the assessment, the lenders will seal a contract aimed to facilitate improvement of capital structure or provision of information.

A conglomerate that fails to implement as promised might face disadvantages, such as stricter deadlines for debt write-off or borrowing rates, or in the worst case, an all-out debt collection.

The annual release, formerly made every April, had been delayed upon the business circle’s request which postponed a report by another regulator, the Korea Fair Trade Commission, on enterprises that need restriction of cross-shareholding.

The FSS’ Thursday release was partly based on the FTC’s report, released in April this year.

Aside from the looming capital structure assessment, creditors and the FSS are set to team up to create a list of conglomerates with bad credit that are subject to creditors-led corporate workout or court receivership by late July.
By Son Ji-hyoung (consnow@heraldcorp.com)