[ The Korea Herald – Send E-mail ]
Hanwha chairman talks US relations with Heritage Foundation president
By Korea Herald
Published : May 10, 2017 - 15:02
Updated : May 11, 2017 - 08:51
Hanwha Group Chairman Kim Seung-youn sat down with Edwin J. Feulner Jr., president of the Heritage Foundation, in Seoul on Tuesday to discuss the future of Korea-US relations, according to Hanwha officials Wednesday. 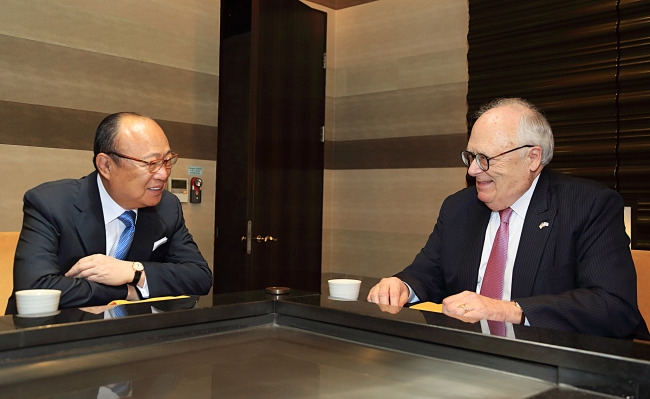 Hanwha Group Chairman Kim Seung-youn (left) and Edwin J. Feulner Jr., chairman of the Heritage Foundation in the US, discuss Korea-US bilateral relations at Plaza Hotel in Seoul on Tuesday. (Hanwha Group)
The Heritage Foundation is a representative conservative think tank in the US and focuses on policy development in the areas of politics, economy, diplomacy and security. Feulner, who also served as an assistant political adviser to US President Donald Trump, is considered a leading figure in the American political scene.

“President Feulner, I urge (you) to help us to further develop our long-standing alliance with the US in the midst of continued instability in Northeast Asia,” Chairman Kim was quoted as saying at the meeting.

Feulner responded by saying that President Trump is taking Korea-US relations very seriously and is making every effort to improve the relationship.

According to Hanwha, Kim and Feulner have maintained open dialogue over the past 30 years and continue to seek mutual consultation in various areas of Korea-US relations as well as the international economic and political orders.