The new top economic policymaker will face daunting tasks, such as making sure the recent rebound of exports and consumer sentiment lead to a recovery of domestic demand and jobs.

External risks include dealing with the US over a possible renegotiation of a bilateral trade deal and minimizing the fallout from Beijing’s economic retaliation against Korea due to the deployment of a US anti-missile system on Korean soil. 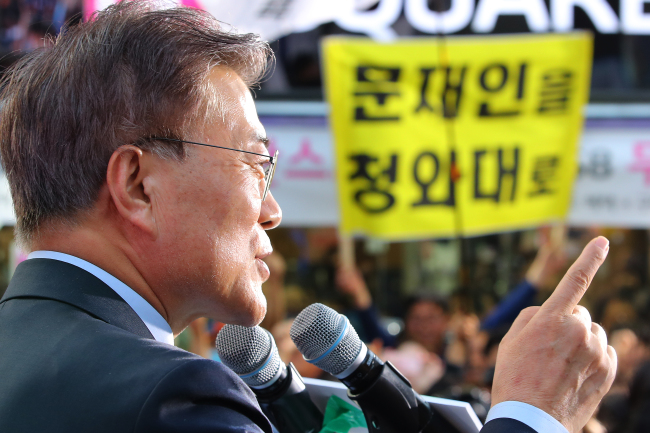 (Yonhap)
Observers have mentioned Lee Yong-seop, chief of Moon‘s emergency economic countermeasure task force, as a likely candidate to be named the new finance minister. Lee served as minister of government administration and home affairs in 2006 and minister of construction and transportation in 2006-2008 under the liberal Roh Moo-hyun administration (2003-2008), during which Moon was chief of staff. The member of the 18th and 19th National Assembly with previous iterations of Moon’s Democratic Party of Korea helped him craft his “J-nomics,” or “Jae-in economics,” for his campaign.

Kim Jin-pyo, also a bureaucrat-turned-politician who served as minister of finance and economy in 2003-2004 under the Roh administration, has also been mentioned on the possible list. Also in Moon’s camp, Kim was behind his pledges on jobs, which the new president mentioned first among the economic issues during his inauguration speech at the National Assembly, Wednesday.

“The economy is in difficult shape, in and out of the country. People’s livelihoods are also difficult. As I promised during the election campaign, I will put top priority on jobs,” Moon said.

“I will also take initiative to reform chaebol. Collusive links between politics and business will be gone forever under the Moon Jae-in government.”

Other possible candidates for finance minister include Kim Kwang-doo, a former economics professor at Sogang University and former president of the Institute for the Future of State, a private think tank. He was once dubbed as a private tutor to ousted President Park Geun-hye, as he devised Park’s economic pledges for the 2012 presidential election.

Experts noted that a new finance minister should come up with a better idea on how to manage fiscal spending, which is expected to increase with Moon’s pledge to create 810,000 jobs in the public sector and spend 10 trillion won ($8.82 billion) in extra budget this year as the first step to do so.

“The market seems to be most interested in knowing how a new finance minister will solve the issue of fiscal spending smoothly. As Moon was frequently attacked in this area during debates with rivals, the finance minister should be someone who’s a professional at this issue,” Oh Suk-tae, an economist at Societe Generale, told The Korea Herald.