Rather, it was a solemn vow to succeed the political legacy of a dear late friend who committed suicide -- former liberal President Roh Moo-hyun.

On a more personal level, however, it marks the rise of a political latecomer taking on his nemesis: former conservative President Park Geun-hye and her conservative camp which ruled the country for the past decade. Calling them “accumulated evils,” he won the election on the promise of total reform. Park had defeated Moon in his initial bid for presidency in 2012. 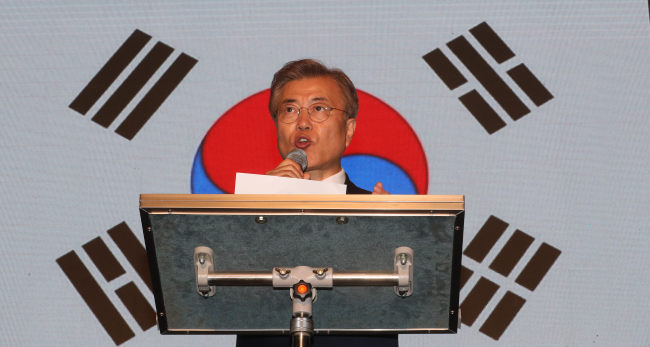 From hungry elite to progressive activist

Moon was born into a poor war refugee family on Jan. 24, 1953 -- in the final year of the Korean War -- in South Gyeongsang Province’s Geoje Island.

With his sharp mind, Moon was accepted into the elite Kyungnam High School. He later attended Kyung Hee University Law School and passed the state bar exam in 1980.

He also graduated second in the Judicial Research and Training Institute but failed to join the judiciary, not because of his academic achievements, but due to his past imprisonment record as a student activist.

What triggered the straight-A student to grow into an anti-government student activist -- and later to become a progressive human rights lawyer -- was the rule of former President Park Chung-hee, the assassinated father of the now ousted President Park Geun-hye. 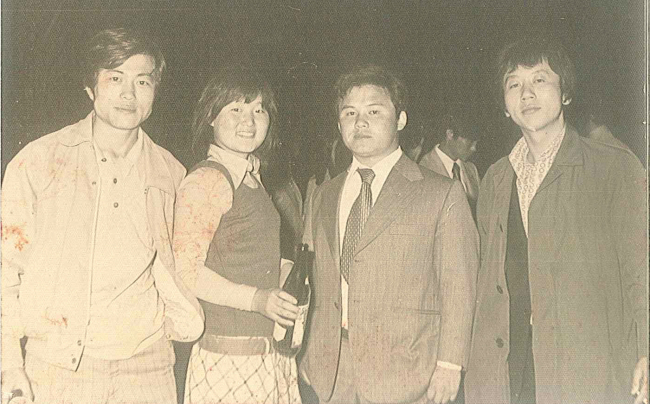 Moon, far left, and his wife Kim Jung-sook during college years. (Yonhap)
Back in 1972, Moon’s first year in university, the iron-fisted president had forcefully passed a constitutional revision bill to allow himself to grasp more power with an indefinite presidential term, an event which drove millions to the streets in protest.

It was no surprise that Moon and the junior Park later stood at odds in the political arena, with the former a dissenter to the former dictator and the latter his daughter who had largely benefited from her father’s controversial legacy.

Another former strong-handed president who Moon came across was Chun Doo-hwan, who seized the nation in a coup in 1980 -- sometime after his predecessor’s assassination -- to rule until 1988.

Having served his military duty as a member of the special forces brigade, Moon received an official commendation in 1975 from his unit, where Chun was at the time commander in chief.

Roh Moo-hyun, the inspiration of a lifetime

“Never had I imagined that it would lead me to my destiny,” is how Moon reminisces his first encounter with his political mentor, lifelong friend and the subject of his most painful memory -- the late former President Roh Moo-hyun.

The two first met in 1982, when Moon moved to Busan to open his own law practice, after failing to be appointed as a judge.

To Moon, Roh was a rare character in the legal circle -- straightforward, unbound by formalities and eager to use his expertise to create a better world.

“Roh was just different (from all other lawyers). He was unaffected, undisguised and friendly,” Moon said in his political autobiography “Destiny.”

“I at once felt that he belonged to the same world as I did.” 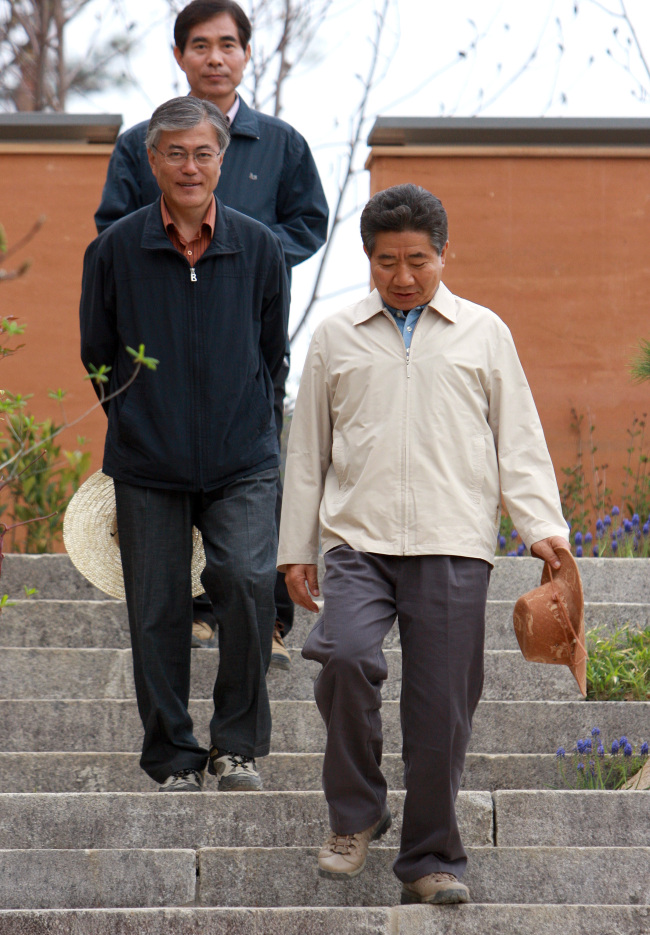 Moon Jae-in and Roh Moo-hyun (Yonhap)
For Roh, the 29-year-old novice lawyer was a fresh reminder of what he had originally set out to achieve for the society in which he lived.

Over the following years, the two worked as co-heads of a small law office in Busan, developing their favorable first impressions of each other into a solidarity strong enough to later determine Moon’s life path, or “destiny” as both might have described it.

Their partnership seemed to reach a crossroads when Roh headed for Seoul as a first-term lawmaker in 1988, while Moon, who never quite saw himself as a politician, chose to stay behind.

“Let me handle things here and go your way,” was Moon’s message, encouraging his colleague but confirming his refusal to join the political arena.

The decision, however, wasn’t his own to make.

When the ambitious Roh seized a dramatic victory in the 2002 presidential election as the nation’s second progressive state chief, succeeding Kim Dae-jung, Moon was the first person he sought to recruit as his closest adviser.

“The presidential secretary for civil affairs will be the one and final post (that I shall assume in Cheong Wa Dae). Do not ask me to engage in politics,” Moon declared, upon reluctantly accepting his friend’s plea for help.

He remained true to his word, serving the new Roh administration for a full year and then offering his resignation to leave for a trekking tour in the Himalayas.

But he soon had to hurry back home from Nepal upon the news that Roh faced an impeachment resolution from the National Assembly over allegedly breaching neutrality during his earlier election campaigns.

From them on, he settled in the presidential office as senior secretary from 2004 to 2007, and as chief of staff until February 2008, staying by Roh’s side throughout his turbulent term as state chief.

Swept away into politics

When Roh finished his five-year term in 2008 and retreated to his hometown Bongha in South Gyeongsang Province’s Gimhae, Moon may have thought that his prolonged political career had finally come to an end.

Then in the following year came the tragedy -- the suicide of the former president amid a probe into corruption allegations concerning his family members. 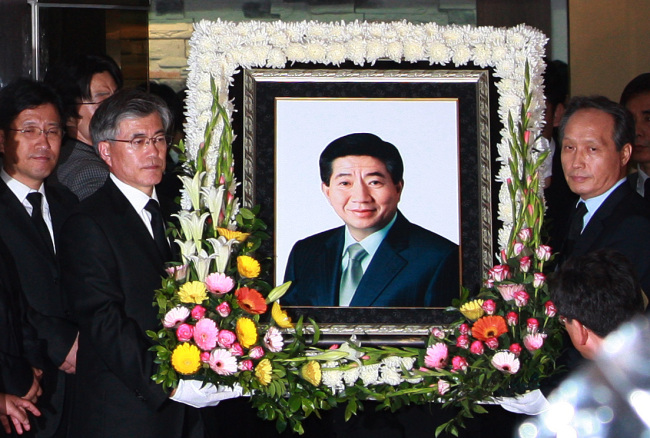 (Yonhap)
As his closest friend and top aide, Moon served as chief mourner at Roh’s funeral, during which his undaunted and disciplined manner caught the eye of the public and eventually turned him into a plausible presidential hopeful for the liberal camp.

What held him back was his chronic reluctance to politics, as well as his fear of following Roh’s footsteps, which was sure to be a thorny path.

In June 2012, the year of the 18th presidential election, Moon at last gave into mounting pressure and jumped into the election race.

Despite numerous challenges, Moon ultimately engaged in a two-way contest against conservative rival Park Geun-hye. The biggest hurdle then was the candidacy unification with independent runner Ahn Cheol-soo, an event which took place with less than a month left to polling day.

But even with all the support from progressive voters, Moon failed to defeat Park. His polling rate stood at 48 percent, an unprecedentedly high figure for a defeated candidate.

The defeat in the 2012 election weighed heavily on Moon, tempering him into a more determined and resolute character.

“Up to (the 2012 election), everything was fate but from now on, I have to start all over again with a renewed sense of mission,” he wrote in his book titled “Dec. 19, The End is yet Another Beginning,” in late 2013, breaking his long seclusion and signaling his political comeback.

His reappearance not only meant that the main liberal wing once again had a presidential hopeful, but also that the factional disputes between the pro-Roh group -- or the pro-Moon group -- and its dissenters rekindled.

But the new Moon chose to take the bull by the horns, each time preferring to make bold actions and readying himself for another presidential race.

Even when a group of dissenters defected from the party along with Ahn and established the People’s Party, Moon held his ground.

The series of wrongdoings and mass tragedies which occurred during former President Park’s rule -- such as the Sewol ferry sinking and the extensive corruption scandal leading to Park’s ouster -- made him struggle all the more for a change of state power.

The ousted former-president Park Geun-hye and Moon Jae-in (Yonhap)
“Every time the nation faced a major crisis, I couldn’t help thinking that none of this would have happened, had I not lost in the last election,” Moon said last month in a televised electioneering address.

“I regret that I wasn’t ready enough in the last presidential election and this is why I am so much more desperate and thoroughly prepared this time,” he said.