[ The Korea Herald – Send E-mail ]
[Election 2017] Shops turn into polling booths
By Son Ji-hyoung
Published : May 9, 2017 - 16:05
Updated : May 9, 2017 - 16:05
The presidential election and a hair salon may seem incongruous, but some polling venues for the 19th presidential election in South Korea on Tuesday were designated inside unlikely commercial shops in Seoul.

A long line of people stood outside a barber shop in Seodaemun, western Seoul, on Election Day, as the store was designated by district authorities as an official polling station.

Inside the store were partitions set up to provide space for the polling booths while couches were offered for people waiting in line. 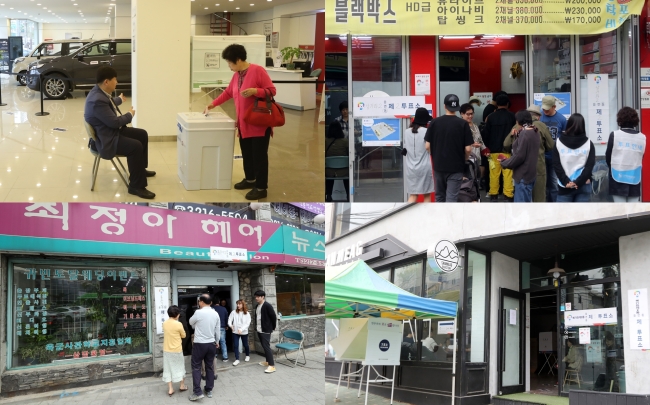 Polling locations designated by the National Election Commission for Election Day on Tuesday include commercial shops. (Yonhap)
Other unlikely venues have included a vehicle window tint shop and a coffee shop in Seodaemun, a furniture showroom in Banpo-dong and an automobile dealership in Neung-dong.

They are some of the 13,964 voting venues designated by the National Election Commission. The Public Official Election Act states that a public venue can be designated an official polling station to provide vicinity and convenience to voters.