As polling stations opened at 6 a.m. Tuesday, citizens were seen taking selfies and proof shots in front of polling stations. While these photos emit a similar vibe with mundane poses and a shot of the election ink smudged on a hand, some took the photos a step further. 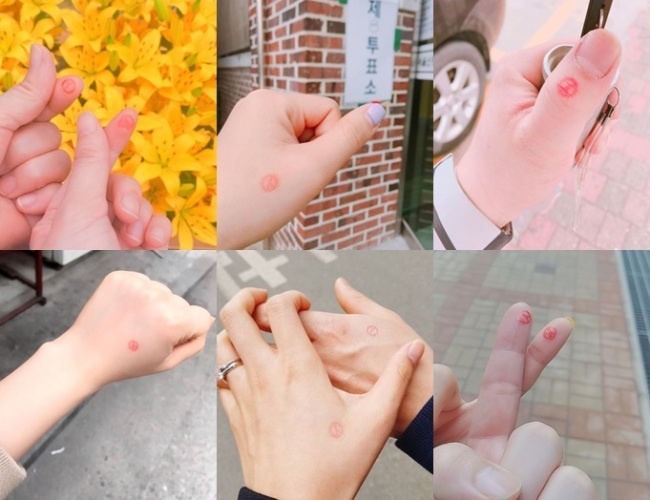 Voters upload photos on Instagram to show they have cast their ballots.(Photos from Instagram)
A South Korean Instagram user “worldchun” posted a selfie with the red stamp on his forehead while donning a benign grin, while another user posted a picture of her hand and her infant baby’s hand, both having the stamp mark. The post was titled, “indirect proof shot for my baby.”

Other photos proved that a “proof selfie” does not always have to involve a person. Instagram user “Kwonsense” posted a single mask marked with a ballot stamp, reflecting the person’s wish to block the high concentration of fine dust in the air.

Instagram user Lee Hye-jung posted a photo of her arm wrapped in a cast, but what made the piece of plastic special was the little red dot stamped on the surface.

Many couples also boasted their close relationships via proof shots in which they held hands that were stamped with election ink.

There were some extreme cases as well.

A proof shot of a man holding a door in front of a polling station in the southern port city of Busan went viral online during the two-day advanced voting that took place last Thursday and Friday.

He intended to say that he “picked” presidential candidate Moon Jae-in of the liberal Democratic Party of Korea, as the Korean word for a door is pronounced “mun.”

Users of ultraconservative online community Ilbe also shared photos of making the group’s signature hand sign, additionally with ballot stamps on their hands. The controversial community recently came under fire as one of its alleged members was charged with sexual harassment of Yoo Dam, the daughter of presidential candidate Yoo Seung-min. The suspect denied he was a member of the community.

This year, voters are allowed to take photos and selfies anywhere outside the polling booths, and they are free to express their candidate of choice. However, snapping photos of actual ballot paper remains strictly prohibited. 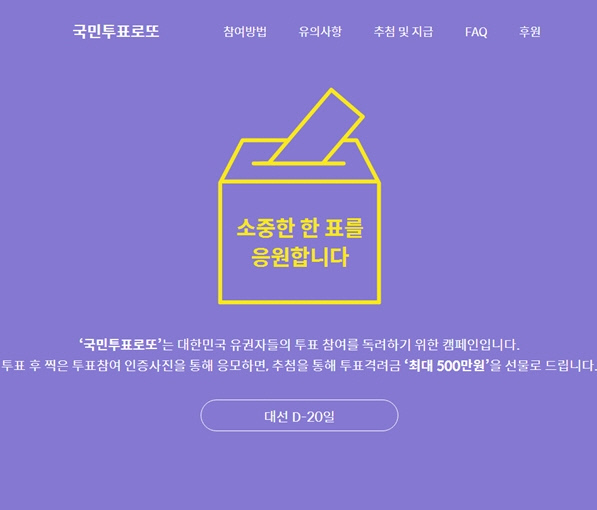 An image of a website opened by a local startup to encourage people to vote
While taking proof shots has also been preferred by Koreans in previous elections, the competition for good shots is more heated this year. Political camps and private institutes have opened various events which require such proof shots to encourage voting.

More than 340,000 voters took part in a vote-encouraging event by a local startup as of 1:48 p.m. Tuesday. A nonprofit website -- Voteforkorea.org -- will reward three randomly selected voters who have uploaded their proof shots.

The popularity of social media platforms such as Instagram has also contributed to the surge of proof shots, making it easy for voters to share their selfies taken at the polling booth.

The polling stations are installed in 13,964 places across the nation and are open from 6 a.m. to 8 p.m.