[ The Korea Herald – Send E-mail ]
[News Focus] Speculative buying of politician-related stocks mirrors presidential race
By Son Ji-hyoung
Published : May 9, 2017 - 14:38
Updated : May 10, 2017 - 20:27
A week ahead of Tuesday’s Election Day on May 2, conservative Hong Joon-pyo of the Liberty Korea Party climbed to the No. 2 spot in a poll for the first time ever.

His spike in popularity did not go over well for the long-time first runner-up Ahn Cheol-soo of the People’s Party in terms of his winning chances, and the stocks were fast to react. The poll was conducted by news channel YTN and was one of the last polls to be released.

The so-called “Ahn-themed” stocks, or stocks of listed firms believed to have business ties, family connections or school ties with the candidate, visibly reacted to the approval ratings.

Whether the listed companies hold any real connections with the presidential candidate or not, the so-called “politician-themed stocks” have for a decade been frequent destinations for individual stock buyers, especially during election seasons.

Price change of such stocks coincide with a presidential candidate‘s rise and fall in popularity, and the appetite for these shares tend to be boosted more by the companies’ alleged personal or business ties to the candidates rather than by the anticipated impact in specific industries from candidates’ policy outlook.

Investors flock to massive buying, partly based on speculations circulating online, on anticipation for benefits a firm can enjoy from possible ties with a stalwart candidate if elected.

Such stocks, subsequently, involve a high degree of fluctuation. A seemingly ordinary remark, event or poll result tend to bring about a significant ripple effect. 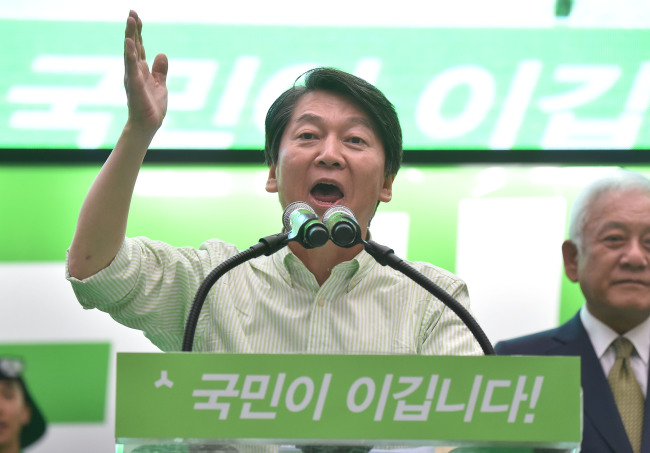 Ahn Cheol-soo of the People's Party (Yonhap)
The plunge of Ahn-related stocks on May 2 came less than a month after Ahnlab, founded by software mogul-turned-politician Ahn, reached 145,200 won on April 3, when he was considered the strongest contender against front-running Moon Jae-in of the Democratic Party in polls.

Sunny Electronics, where a former Ahnlab executive was previously appointed as vice president, came to 8,190 won on April 10. Both shares started to skyrocket soon after the presidential race was prompted by ex-president Park Geun-hye’s impeachment in March.

However, a lead in polls does not always directly translate into a rise in stock price of well-known politically-themed stocks.

Wooridul Huebrain, whose major stakeholder had allegedly maintained a relationship with the all-time poll leader Moon, was priced at 4,835 won as of Tuesday, down 62.5 percent from 12,900 won on March 29 after a weeklong rally.

On the other hand, the announcement of a candidate dropping out can set off a severe bubble breakdown. When former UN Secretary-General Ban Ki-moon withdrew his bid for president on Feb. 1, stocks reportedly related to his family nearly hit the price floor, and continued to shrink for a month to one-fourth of the price at its height.

Lim Sang-beom, 27, was one of those individual investors who watched earlier profits from such high-risk stock trade evaporate. 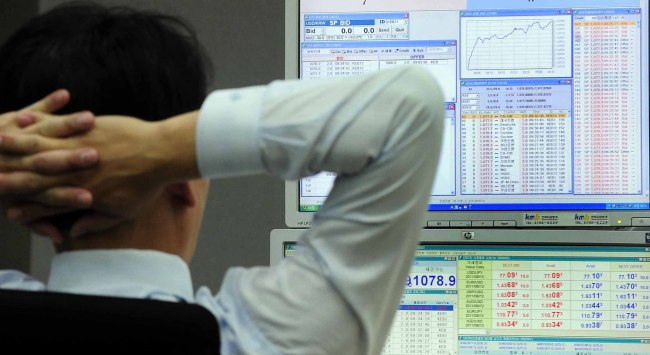 (Herald DB)
“Sowing profits from the Ban-related stocks in three previous buying, I never expected his abrupt decision to quit and the subsequent drop,” said Lim, who had invested in three Ban-related companies, one of which, Great New Wave Coming, was owned by Ban‘s nephew. “I should have been more cautious.”

Individual investors like Lim find it appealing to reap profits from the “hard-to-miss” rallies through short-term stock trades.

“Those stocks just stand out,” said Lim, who described himself as an avid stand-alone stock market watcher. “An investor would not turn the head against the stocks showing rapid surge.”

Such “politician-themed stocks” began to come to the fore since conservative Lee Myung-bak took the lead in the 2007 presidential race. When he put forward policies aimed to invigorate domestic economy by refurbishing rivers in South Korea, the price of second-tier Kosdaq-listed engineering firm Eewha Construction peaked at 67,300 won on Dec. 7, 2007, two weeks before the election, after hovering below 3,000 won for 16 months until early August 2007.

The tendency resurfaced in the 2012 presidential election, when right-wing candidate Park Geun-hye defeated Moon of the former Democratic United Party. EG, a Kosdaq-listed firm run by Park’s brother Park Ji-man, recorded its highest closing price of 80,700 won on Jan. 4, 2012, about two weeks after she was elected president. For months, the stock had hovered at around 25,000 won until two weeks before the Election Day, 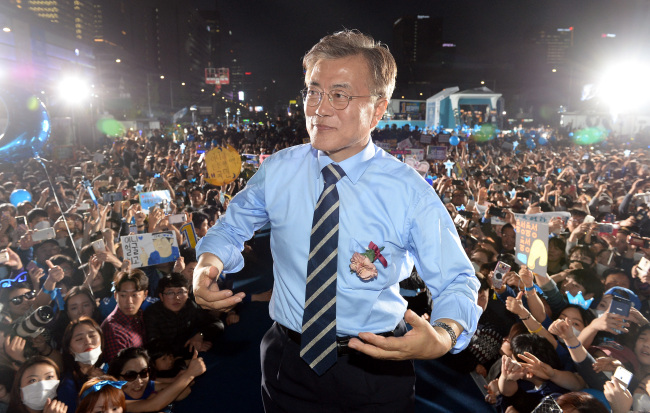 Moon Jae-in of the Democratic Party (Yonhap)
Meanwhile, stocks allegedly related to Moon – also a strong contender five years ago -- plunged during the cited period. In December 2012, shares of Wooridul Huebrain shrank to less than one-fifth of its value in October of that same year.

Individual investors largely suffered losses -- nearly 2 million won per person on average -- from such speculative investments, according to a probe by the stock market operator in January.

More than seven out of 10 turned out to have taken losses from investing in politician-themed shares, showed the Korea Exchange‘s analysis on politician-related stocks. The data on 16 stocks also indicated 73 percent of individual buyers, taking up 97 percent of all buyers, saw losses. Among those who saw losses from the stocks, 99.6 percent were individuals.

To prevent the individual’s damage incurred by speculations, financial regulators have taken action against the volatility.

The Financial Supervisory Service demands that listed firms show stock fluctuation issue disclosures on the FSS-run web portal. Firms normally deny speculation that the firm is related to a candidate on the disclosure, but contributes little to stabilizing prices.

The FSS also launched a team in March to address such “market disruptions,” encompassing spreading rumors online over ties with politicians and manipulating stocks on a short-term basis. The watchdog said in April it spotted two cases of price manipulation from politician-related shares.

“An investor should confirm substance of the stocks and refrain from buying stocks while blinded by their sudden rallies,” said FSS in a set of guidelines issued for individual investors.