Wearing a blue suit with a white shirt, Moon arrived at the school gate at 8:35 a.m. The venue was already crowded with citizens and reporters, trying to catch a glimpse of the presidential front-runner.


“Only voting can change the reality,” he said after he came out from the polling station building. “Please bring together the strength to build a proper country.”

When asked about the meaning of this year’s election, he said it is the achievement of the citizens who expressed their intentions and hope to change the nation.

Moon pledged to bring together the divided political forces across the country and cooperate with rivals to mend the cracks. 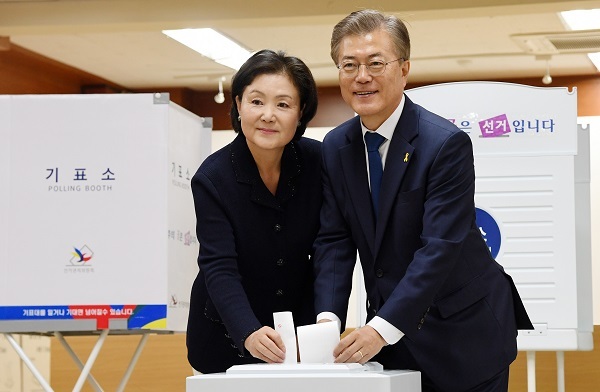 The liberal Democratic Party's presidential candidate Moon Jae-in (R) and his wife Kim Jung-sook cast ballots at a polling site in Seoul on May 9, 2017, as voting began across the country for a presidential election. (Yonhap)
Moon’s supporters and ordinary citizens who came to vote at the polling station cheered and took selfies with him as he headed out of the school grounds. Some supporters shouted, “Make Korea a good country, a proper nation.”

Some asked for his autograph on their smartphones and T-shirts.

Song Nan-young, a supporter of Moon, came from Bucheon, south of Seoul, to cast her ballot at 6 a.m. at the school. “I came here taking an hour and a half ride from my home to see Moon in person,” the 34-year-old company worker told The Korea Herald. “I am sad that I would not be able to see him so often anymore when he goes to the presidential office tomorrow, but I am sure he will do a good job as president.” 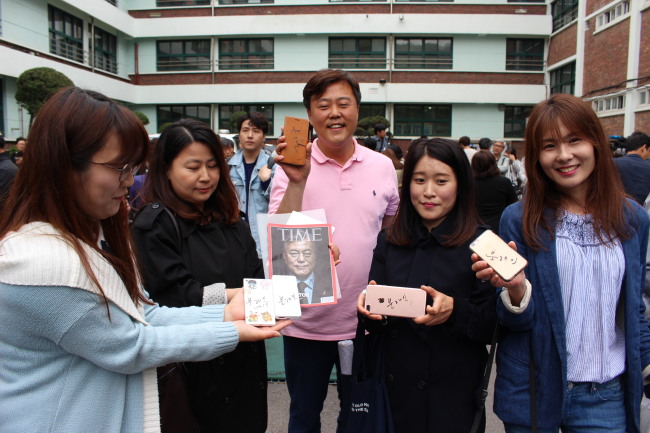 Supporters of Presidential candidate Moon Jae-in hold out their smartphones and a magazine for Moon to sign, outside the polling station in Hongeun Middle School in Seoul on Tuesday. (Jo He-rim/The Korea Herald)
Moon has consistently topped local polls, with support ratings ranging from 35 to 40 percent.

The 64-year-old candidate went back to his home, and he may come out to encourage citizens to vote, his campaign aide said. He will go to the National Assembly and keep watch of the outcome there “when the ballot turnout shows positive for his win in the evening when the vote counting starts,” his camp added. 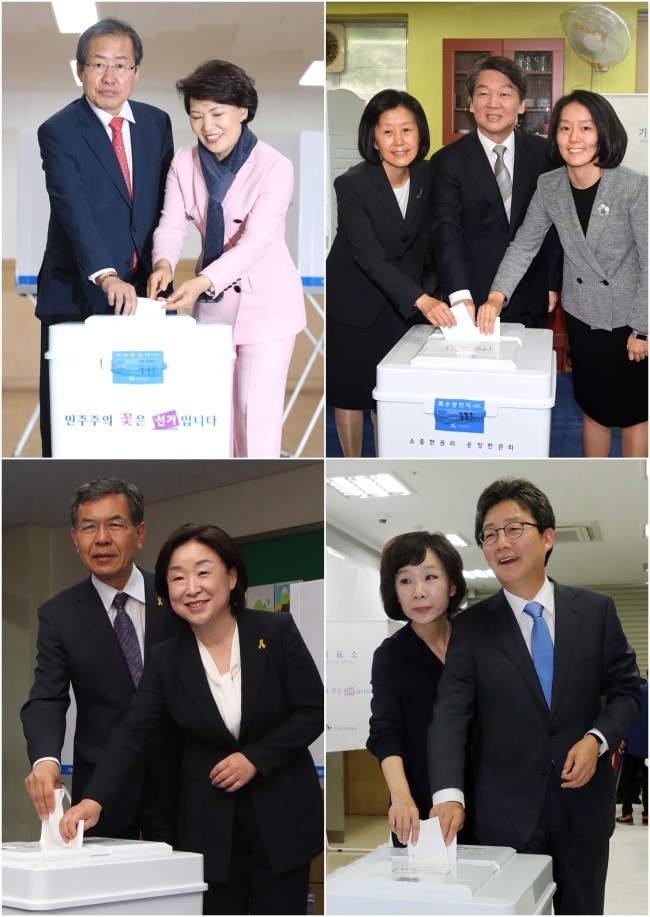 (Clockwise from top left) Hong Joon-pyo, Ahn Cheol-soo, Yoo Seong-min and Sim Sang-jeung. (Yonhap)
His runner-up rivals -- Hong Joon-pyo of the Liberty Korea Party, Ahn Cheol-soo of the People’s Party, Yoo Seong-min of the Bareun Party and Sim Sang-jeung of the Justice Party -- all cast their vote in their respective constituencies early in the day.